The hope, promise, and tragedy of the old Redcliff flour mill 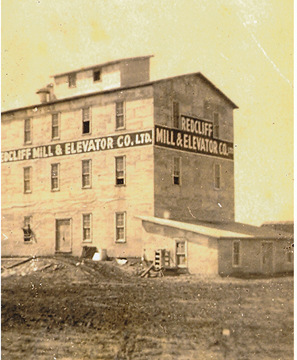 Photo courtesy of Fred Hauck- The Redcliff Mill and Elevator Company was the second business to open in the then village of Redcliff in 1910. Three years later, it was no more.

By Fred Hauck
There’s currently a rock on the corner of Broadway Avenue and 1st Street N.E.  with the words “Redcliff Flour Mill 1910-1918” written on it. Depicted beside those words is the tall industrial building in question; the Redcliff Mill and Elevator Co. Limited.
Unfortunately, not all the information written on the rock is correct. The mill actually only operated from 1910-1913. This is the story of the flour mill’s hopeful beginning and abrupt end.
Edward C. Danelz was born in 1883 in Minnesota. He was in his twenties when he decided to travel north to the new townsite of Redcliff, Alberta. The townsite owners, Wheeler and Lockwood, prompted many Minnesota business men to relocate to Redcliff at about that time.
Danelz was the son of a wealthy mill owner, and he persuaded his father to help get his own mill off the ground in the fledgling village of Redcliff. Ed’s father was a 40 year veteran of the flour business with great connections in the industry, so the flour mill would be established as Redcliff’s second oldest business in 1910 (Redcliff Mfg. being the first).
The company’s officers at the time were President J.M. Danelz, (Ed’s father), Vice President L.D. Danelz, (Ed’s brother) with Ed himself serving as the company’s Secretary/Treasurer. Ed was the only one of the three to actually come to Canada.
Redcliff was an attractive setting for the new business. The CPR spur line running between the mainline and Pressed Brick (IXL) Plant ran right past the site of the mill, making it easy shipping to other parts of Alberta.
The flour mill site took up 10 lots, and the mill office was right across the street. The mill was a large, three storey building. The third storey was Ed Danelz’s living quarters. A Chinese boy named On Sing was eventually hired on as a housekeeper.
The mill’s output was listed as 750 barrels of flour a day, but to start only 250 barrels were produced. The name of the flour was “Supreme Flour.”
The mill and elevator handled grain of all kinds such as wheat, barley and oats, and set up branches in Medicine Hat and Edmonton with which to make transactions in these commodities. The mill also had a provision where they could clean grain for local farmers. The business got off to a good start and had decent success in the three years it operated.
The flour mill’s end came in February of 1913. One Dr. Brown saw the flames at about 4:30 a.m. while out on a house call. The fire alarm sounded in Redcliff, but as the town had no adequate firefighting equipment for such a blaze its volunteer fire department could not save the building. The Medicine Hat Fire Department came out to help as well, bringing a motorized fire truck with them and a five man crew.
An electrical short was found to be the cause of the fire, and the building was a total loss. The estimated $50,000 value of the building and its equipment was only partially covered by insurance. After the fire, the mill’s basement sat untouched for years, until finally becoming Redcliff’s first swimming pool.
Ed Danelz was elected as mayor in the first Redcliff civic elections held in 1912, beating out Dave Broadfoot Sr.
One last note; Ed Danelz also signed up for military service the First World War, ending up as a Lieutenant. After the war he never returned to Redcliff.