Lehr’s garage holds special place in the history of Walsh 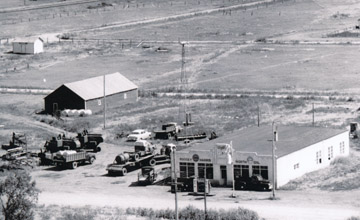 Photo submitted by Fred Hauck - Lehr's Garage (pictured here in the 1950s), was once an important business in the hamlet. In its heyday, it sold fuel, farm machines, and had a busy machine shop.

Submitted by Fred Hauck
Most of my writings up until now have been about Redcliff and Redcliff history, but, once in awhile, I get inspired to stray off course.
Recently, a friend of mine by the name of Harley Lehr passed away. He was a lifelong Walsh resident. I first got to know Harley and his wife Celia through the collecting of antiques and collectables. They owned, for many years, “Silver Sage Antiques” along Highway 1 at Walsh. Our friendship grew from there.
Not too long ago, Celia gave me some of the old “Lehrs Garage” items that Harley had saved over the years—thermometers, calendars, ledger books, etc.
Harley’s dad Ralph Lehr started “Lehrs Garage” in 1929. The building was located on Main Street in Walsh. Ralph obtained his mechanics license in 1927, and did all kinds of mechanical repairs. Ralph handled the North Star Gas and Oil franchise, and the Massey-Harris machinery dealership there in the 1940s and 1950s. There were a lot of local farmers with Massey tractors and combines in those days. The Massey 44 and 55 tractors were popular, and so were the 90 and 92 combines. As time progressed Ferguson tractors were added to Lehrs line-up. Lehrs competition at that time was Ed Reinhardt’s John Deere dealership in Walsh.
Eventually North Star Gas and Oil became nothing but a Canadian memory, and Shell became the fuel sold at Lehrs. Massey-Harris-Ferguson became Massey-Ferguson.
As with all machinery dealers, a few farm toys were also sold at Lehrs geared toward the next generation of farmers. I did recently see a toy Massey 44 with attached No. 11 manure spreader that was sold at the garage. The toy was received by Ralph’s nephew who, for some unknown reason, never played with it. It looks just as it did some 60 plus years ago.
The final Lehr business in Walsh was called “Lehrs General Supplies.” This business consisted selling Shell gas and general auto supplies like tires and batteries with some mechanic work done on the side. It was sold in 1976.
One final note; Harley Lehr was in charge of the Walsh water treatment plant which supplied water to the community. He started when the municipal water plant first came to Walsh, and did not quit until he retired at age 65.