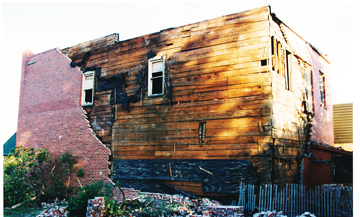 Photo submitted by Fred Hauck- The I-XL Pressed Brick was a sad demolition in the history of Redcliff, but is not the first, nor will it be the last. Pcitured: Cann's Grocery being demolished.

Submitted by Fred Hauck
As the last of the large kilns and chimneys disappear from the old I-XL Redcliff Pressed Brick site, I think back to my years in Redcliff, and the other historical buildings that have disappeared. Now the only reminders of Redcliff’s industrial heyday in the early to mid-teens are the cement pillars near the ball diamonds. This was the site of the Rolling Mill where they recycled steel, melted it down, and made new steel. The other site is the glass factory (1913-1989) on First Street N.E.
Thinking back, I do remember for many years when there were ruins at the east end of Broadway of the Premium Brick. There were a few buildings and the tall chimneys. I also remember when, in the 1970s, the problems they had with the removal of the chimneys, and the different ideas tried; and the final caterpillars and steel cables that pulled them down.
I remember in the 1970s and 1980s a lot of old commercial buildings that were demolished. The old brick flour mill office on the corner of Broadway and First Street N.E. This was, later on in life, the Walt Charles Confectionery store. There are new apartments on this location today. The large, brick building on the corner of Second Street S.E. and Broadway, where the doctor’s office is now; this was at one time a bowling alley. There was the two storey brick building across from the Legion, Third and Broadway N.E. This, at one time, was a barber shop. It was demolished to make way for a Mars Convenience Store, and a gas station (now the video rentals).
Another was the brick store between Cann’s Grocery and the Redcliff Hotel. This was Hick’s Trading Co., (a clothing store). The only one I had a personal hand in demolishing was Cann’s Grocery on the north side of the Town Hall. At the time, there were two choices for the old building: Do the necessary repairs to make it habitable, or demolish it.
It was a two storey brick building, and the brick house in behind it was used as living quarters. The roof leaked very badly and the basement was always damp. The property was purchased from Rupert Cann’s family, and the small brick house was rented out. The store needed a lot of money to keep it alive; so the decision was made to tear it down. The whole process was done by hand. The old fir wood was largely reclaimed along with most of the bricks. The long 2×8-10’s and 12’s are no longer to be found at a lumber yard, and remember this is full dimension lumber ; two inches by 12 inches was just that.
One of the pieces can still be seen in the Redcliff Museum, I donated the wood and Ralph Pinder did the work. The wood was used to refurbish the old brick and coal car. Myself and my dad Alfred did some of the work on the wheels.
The Cann grocery building was originally the Keats grocery, built by W.M. Keats. He was Redcliff’s first grocer back in 1910, the building was built in 1913. The original building was at Redcliff’s south end.
There are still a few building reminders of Redcliff’s early days out there. The museum building is actually two buildings. One half was originally a real estate office, (owned by Redcliff’s founder Dr. Stoner). A jail in the rear of the south half was the police station and town hall. The north half was at one time the national gas office (Western Canada Power and Fuel).
Others were the old drug store on the corner of First and Broadway S.E., owned by Redcliff’s first post master and druggist “Doc” C.T. Hall and the Legion building Broadway and Third Street S.E.; this was an Imperial Bank in the early days. Built in 1910, the Redcliff Hotel was Redcliff’s first hotel. By the mid-teens there were three hotels, but the other two burned down.
As a closing note, with the brick yard demolition, I should mention the common denominator throughout the article is every building talked about was built of brick made in Redcliff. All would now be over 100 years-old, and most, if not all, the post-demolition brick was cleaned and repurposed.