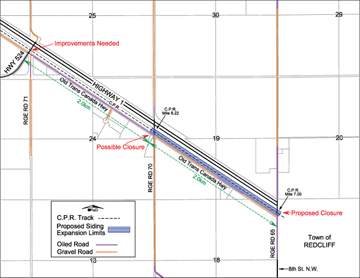 CP Rail and Cypress County have been engaged in slow moving discussions since the spring about the proposed railway crossing closures at Range Road 65 and 70.
Discussions had included cost estimates and cost sharing options for paving the Old Trans Canada Highway between both range roads as well as cost estimates for paving from Range Road 65 to Highway 524 if the closures were to happen.
CP Rail’s feeling was the costs were too high and they needed to explore their options, while from a county’s administrative perspective, they want to delay the temporary closures on the crossings until the solution is affordable.
“CP has to have approval from the road authority to close the crossing,” said county’s director of public works Curtis Richter.
“They own the crossing, but we own the road and there definitely has not been approval to close any crossings.”
Concerns have come from commercial business operators in the area, Silver Creek Recycling, agriculture producers and residents.
“Just the access,” said Richter.
“The Town of Redcliff has concerns as well for emergency services response times.”
CP Rail has been going ahead with extending their side track, however, Richter said he does not know what the rail line’s purpose with the project is other than “they can’t block a crossing,” with their trains.
If a train were stop to stop there, the cars would have to be broken up to not block the crossings.
The county is also respecting those ratepayers that are near the crossings, while options are being explored if CP needed a crossing closed.
“The county can say no and can leave them open,” said Richter.
CP provided the Cypress Courier a statement by saying “CP continuously works with communities in which we operate to determine if there are opportunities to reduce risk to motorists, pedestrians and our railway by closing “redundant” at grade road crossings.”