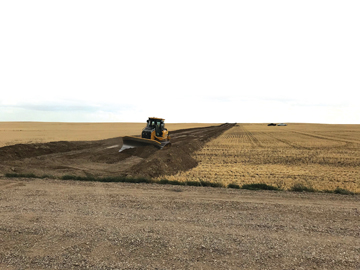 The Whitla Wind Farm got the go ahead from the Alberta Utilities Commission at the end of August and crews began building the access roads to the project south of Bow Island on Sept. 10.
The $325-million Capitol Power based 56-wind turbine project is starting with the construction of the operations and maintenance building which is going to be completed by early 2019 by Redcliff’s GVN Structures.
“A lot of people have been waiting to see it get going,” said Jerry Bellikka, the project’s director of government relations.
“Now we have shovels in the ground and next spring will be the busy part when we start putting up the towers and blades. For now the first step is building the operations and maintenance building and the substation. Then we’ll work out from there.”
Calgary’s Rising Edge Technologies is building the substation and access roads, while the safety management plan is being mapped out by J.F. Safety Consulting out of Medicine Hat.
The wind towers together will produce 200 megawatts of power.
“It has been tremendous to work with the community with Bow Island town council and the County of Forty Mile ,” said Bellikka on the local feedback.
“It’s been a great relationship.”
The county has built several new access roads for the project which will be used for transporting equipment for next year and once the run off is complete, it will be then where foundations will be dug for the towers and concrete, he added.
Once the project is done there will be between eight to 10 full time employees in the county and when the wind tower construction begins next spring there will be up to 200 people on site.
“You’re always a little bit leery,” said county Reeve Steve Wikkerink.
“You talk about these things for a long time and you wonder if they’re ever going to fully come through. It’s nice to see them moving some dirt.
“We’ve been building some roads for them for a couple of months already but still it’s always nice to see the actual project start.”
The wind turbine foundation construction, plant installation and remaining access road construction, wind turbine and assembly and testing will be worked on in 2019.