Eagle Butte’s modernization project is off to a good start 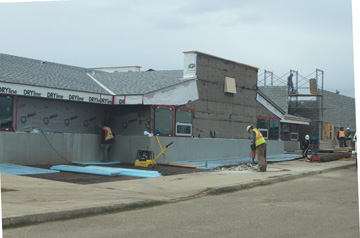 Shovels broke ground on the Eagle Butte Modernization and Addition project in June, where construction has gone without a hitch through the summer and into the first month of school, according to Prairie Rose School Division (PRSD)officials.
The modernization project included the installation of a new roof, which will have solar panels that will allow for the school to become more energy efficient and provide more learning opportunities for students.
Interior renovations saw a new GTS (career and technology studies) shop built , while the science lab, library, common areas, cosmetology lab, special education rooms, drama and art rooms and two retractable walls for classroom spaces.
“I think they’re (contractor Wahl Construction) going well,” said PRSD’s secretary treasurer Ryan Boser.
“They’ve had to be flexible in the areas that they worked on over the summer. I know Wahl Construction tried to get as much work done as possible while our students weren’t in the building.
“They’re working right now as school goes and that makes it more challenging to ensure our students are in places now they’re not working.”
Walls have put up the for the new CTS shop, the north end of the roof has been redone, while all the medal siding on the north side has been installed and the windows have been replaced on the exterior of the school.
Students, staff and visitors will notice another difference with all the dirt being taken away from underneath the windows in front and in the back of the school.
“It has more of a building look to it,” said Boser.
“It looks bigger because of that and they’ll being laying a cement area in the front as well. That hasn’t been done yet.”
The cement pouring is commencing this week.
As for the interior, crews are in the midst of finishing off bathroom renovations on the east side.
The cosmetology lab is nearly finished as the room is waiting for a change out in floor plugs and the student collaboration lab is waiting on glass doors for the retractable wall and will be complete by the end of October.
Additionally the art class room is done and in use.
With winter around the corner, the goal is to have enough of the school done for students, but where the challenge lies is to get the eavestrough and the outside insulation done and concrete poured, cleaned up and keep the heat in the building and the roof secured on the CTS shop.
“There’s alot of work to be done yet though,” he said.
“The division knows that it’s possible it could extend passed the summer of 2019. Our hope is to make as smooth of a transition as possible going into a school year. But at the same time, knowing construction projects, they tend to fall behind for reasons sometimes out of our control.”
Boser has not heard any negativity from students or staff and are embracing the change.
“I think everybody sees what the final outcome is going to be,” he said.
“Even though it’s challenging, it makes it a little bit easier just to know what kind of beautiful facility that both our staff and students are going to receive at Eagle Butte when the modernization is over.”
The full project has a completion date of summer 2019.