Little to no damage to municipalities during cold snap 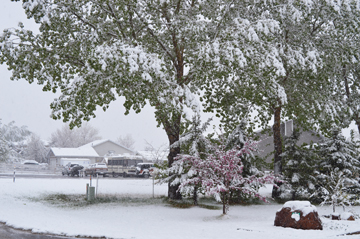 PHOTO BY TIM KALINOWSKI- Heavy, wet snow fell throughout the day on Monday, providing much needed moisture, but also stressing trees in Cypress County's hamlets as they were bent to the ground by the snow dump.

Local municipalities survived the frigid temperatures a couple weeks ago with very minimal damage.
The Town of Bow Island had one main break in front of St. Michael’s School on Second Avenue and was repaired by Feb. 17.
“Overall, not too much impact on the cold weather,” said Dave Matz, town chief administrative officer.
“Generally it’s a concern when we have that extreme, cold weather–it does cause water breaks. We had one that came up and luckily there were no others and hopefully we don’t have any further water breaks.”
Matz said there was no other damage around town that he was aware of.
Village of Foremost foreman Trevor Ferguson said nothing froze up.
“Usually we have problems, but we were lucky this time,” he said.
There was no other damage in the village, he confirmed.