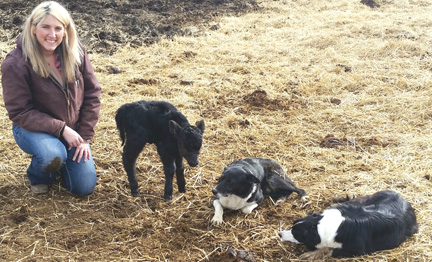 PHOTO SUBMITTED BY CHANTAL ROTH - When Chantal Roth first saw the size of this little calf, she did not think it would make it. Little Maisy, seen here with Roth and her dogs, Gus and Shadow, weighed a mere 24.11 lbs. at birth.

By Carlie Connolly
On Mar. 16 at 11:30 a.m. out came a little calf, but this calf was exceptionally little, weighing in at 24.11 lbs. The average calf weighs in at around 70 lbs, but this spunky little calf, Maisy was born, having tons of energy.
One of the owners of the farm near Irvine, Chantal Roth was shocked at how small she was and even more shocked that she made it out alive.
“I’ve never even heard, nor has my husband heard of a calf this small even surviving even being born alive,” she said.
She called around, thinking that this little calf was a breaking record for the smallest one, but she was beat by another small calf, which she said was 16 lbs.
Having two dogs on the farm, Roth watches Maisy run around, chasing the dogs in the house. She calls her personality a spitfire with spunk.
“I’ve had some regular sized calf’s that I’ve never seen do that before,” she said.
Maisy’s mother is a first time calving heifer, but is a five-year-old cow with this being her third calf. The mother was also artificially inseminated.
As soon as she was born, Roth brought her into the house to dry her off and give her extra TLC since she was so small.  She milked her mother so that her first milk was her mother’s colostrum.  She then bottle fed for a while and later brought her back  to her mother to nurse since she proved to be a very strong and hungry calf.
When they are that small, Roth said it means they are not fully developed, but that hers is full term. Her bone structure is all there and she went to the washroom fine, so everything inside is working so far, she said.
This little calf plays in the house with her two dogs, and even wakes up Roth in her bedroom to be bottle-fed.
Her and her husband are located in Irvine with around 250 cows . She said that this little one will be kept separately for quite a while until she is caught up.
Even though her husband is all business when it comes to their cows, she likes to keep her special ones.
“Usually the one’s that we give name to, they stick around.”