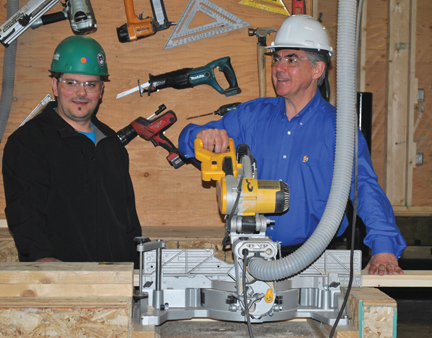 Jim Prentice, who has been on the campaign trail for the Progressive Conservative Party, toured TruCo Structures in Bow Island last week. Pictured is TruCo employee, Jacob Schmidt showing Prentice how to use the circular saw.

By Jamie Rieger
Jim Prentice has been hot on the campaign trail since announcing the May 5 provincial election date, and made a stop in Bow Island last Thursday, taking in a tour of TruCo Structures and visiting with local dignitaries in an attempt to regain seats in the Cypress-Medicine Hat riding which was lost to the Wildrose Party in the last election.
The Alberta Land Stewardship Act, including property rights and surface rights, has been a controversial issue in rural southeast Alberta ever since it was introduced and Prentice vows to make necessary changes to the ALSA.
Prentice, who is an attorney with a background in property rights, said the Alberta Land Stewardship Act was far too over-reaching as it was written and his first Bill as premier was to repeal the Land Assembly Act, which he did last autumn.
“I have a strong background in property rights law, including farm relocation and I know how contentious this has been to our landowners and I will continue to work with the farmers and landowners with their concerns over Bill 36,” said Prentice.
As rural municipalities work at replacing aging infrastructure and make long-term plans for their projects, many municipal leaders are concerned about the longevity of the MSI grants, a mjor source of funding for infrastructure projects. Prentice said Municipal Sustainability Initiative funding will continue to be made available.
“MSI will continue and it part of our budget. It is set to continue until 2020 and we will be working on MSI, the Second Generation,” he said.
Tony Isaac, president of TruCo Structures, where the Prentice tour took place, was forced to lay off about 60 employees in January due to the drop in the oil prices and less demand for TruCo’s products, which are primarily building living quarters for oilfield workers.
Isaac was also able to talk to Prentice about the province’s Charitable Tax rollback, a concern for TruCo which makes significant charitable contributions to the community each year. In the past two-and-a-half years, TruCo and its employees have contributed more than $300,000 to various causes in the Bow Island area.
“I am very passionate about this part of what we do and I wanted to take my concerns of the Charitable Tax rollback to Prentice and hopefully, he takes those concerns back to Edmonton with him,” said Isaac.
When the provincial budget was announced last month, one of the items to see a rollback was the Charitable Donation Tax Credit, which is decreasing from 21 percent to 12.75 percent on donations over $200, which is expected to save the province $90 million a year.
Prentice said that the changes will be watched closely and will be reassessed if there is a reduction in charitable giving.