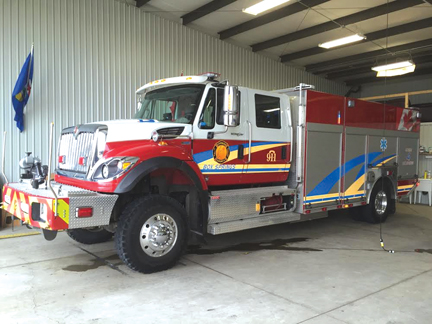 PHOTO SUBMITTED BY JOHN MCBAIN - The Box Springs fire truck, shown above, is very similar to the new truck that the Seven Persons volunteer fire department will be receiving. Cypress County council approved the purchase at their Apr. 21 meeting.

By Carlie Connolly
On Apr. 21, Cypress County approved a lower priced fire truck for Seven Persons at a cost of around $642,000 dollars. The new fire truck has many benefits including replacing a two wheel drive truck with a four by four truck. The current one’s are regular cab and are being replaced with a crew cab, and they have better storage and different grass fire set ups on them, so they have a high pressure pump set up on them which saves considerable amount of water when it comes to fighting fires.
The council had approved $500,000 dollars for the purchase of a new truck in the 2015 budget, but tenders were received from two vendors, which are more than the amount budgeted. Council approved the lower priced truck with the extra money to come from capital equipment replacement reserves.
The current truck in Seven Persons will be going to the county office to replace the current engine 11, which is the spare truck, which is a 1980 Chevy. The new one is a 2015 International and the one going to the county office is a 2004 Sterling.
“It’s just trying to make sure all truck are up to date,” said councilor Dustin Vossler.
They run a 20-year replacement schedule on their trucks, so every 20 years, they get upgraded. This one is getting done early and he said that there is no point in having a brand new truck as a spare truck.
“It’s getting to the point where it’s unreliable. Don’t get me wrong, its an excellent truck, its fought a lot of grass fires and it still works really well, but its getting old and its getting tired and hard to get parts for.”