MP Payne sends word of thanks 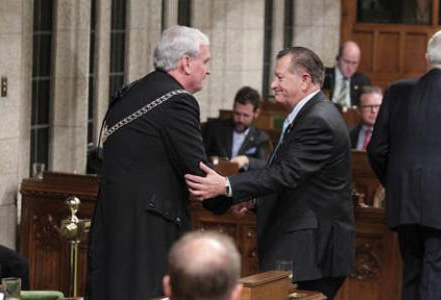 LaVar Payne, MP of the Medicine Hat constituency, gives Sargeant-at-Arms Kevin Vickers words of thanks in Parliament on Oct. 23.

LaVar Payne, Member of Parliament for the Medicine Hat was on Parliament Hill on Oct. 22 when a gunman shot and killed Cpl. Nathan Cirillo, who was guarding the National WAr Monument in Ottawa.
The gunman then stormed Parliament Hill and was shot dead by Sargeant-at-Arms, Kevin Vickers.
Last week, Payne issued a written statement thanking people for their support and in thanking Vickers for his bravery.
“I received a number of emails and calls from concerned individuals, including many constituents. I thank you all for your concern, and appreciate that you are in solidaritt with us as we lived through the events that transpired in our Nation’s Capital,” wrote Payne.
Payne went on to recognize Vickers in his statement.
“All Canadians recognize the quick action of the Sargeant-at-Arms, a largely symbolic position historically, rooted in the best traditions of the Westminster Parliamentary system. It is fitting that the man currently filling that position, Mr. Kevin Vickers, stopped the perpetrator and ensured that many more lives were not in danger that day. I and all Canadians, owe a large debt of gratitude to Mr. Vickers for putting an end to the carnage that enveloped Ottawa on that fateful day.”
Payne also noted the two fallen soldiers who gave their lives that week at the hands of radicalized extremists, as well as the officers who attempted to apprehend the gunman.
“The entire people of Canada is united in their praise and thanks to the brave men and women of our security/police services who so bravely acted to ensure that the perpetrator could do no more damage. The are also eternally grateful for the life and service of Cpl. Nathan Cirillo and Warrant Officer, Patrice Vincent, two men who died in the name of Canada.”