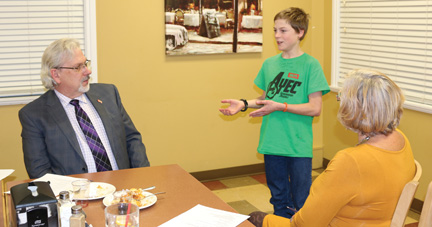 By Jamie Rieger
Fourteen-year old Tyler Mitchell stole the show at the Bow Island/Burdett Chamber of Commerce annual general meeting held recently at the Rolling Pin.
Mitchell, who was sponsored to attend last year’s Entre-Corp Entrepreneurial Camp, gave a brief presentation of his experience to the Chamber audience.
Mitchell explained how he and his team had to come up with a business plan and get a bank loan for their mock business, “Shrinky Dinks”.
“Our business did pretty good. We did not use all of our money, so we each got some back,” said MItchell, adding that the products were marketed to parents at the end of the camp session.
Mitchell had no problem fielding questions from those in attendance and was well-prepared before giving his speech.
He also told the group that the camp was not only about learning about entrepreneurship, but they had fun as well, taking part in actitivies like soccer, volleyball, and rock climbing.
When asked if he would like to go back, Mitchell did not hesitate in saying he would and would possibly like being a youth leader when he turns 16.
“It was pretty fun. I loved it and want to go back,” he said.
MItchell also enjoyed the rest of the AGM that took place after his speech, including a speech by Theresa Hardiker, executive director of the Economic Development Alliance of Southeast Alberta, who spoke about how economic development has evolved over time.
“There has been changes in how we look at economic development, even from five or 10 years ago. It used to be we would attract new business by lower taxes, lower utilities, an land offers,” said Hardiker. “Now, we look at our communities where everything comes together as a synergy.”
She also discussed how businesses can look at other opportunities during times of economic slow-down for their primary product.
“Small business makes up 85 percent of economic growth in our communities and they need to think outside the box during slow times and adapt their business to other market groups,” she said.
An election of officers was held, with Bernice DeLeenheer being re-appointed as president, Chandra Lane as vice-president, Alain Thiebaud as treasurer, and Chris Pinchin as secretary. The directors will be. Ruth Babcock, Robin Knibbs, and Nan McLean.
The annual Christmas lighting contest winners were also announced:
Best residential (overall lighting): Joe and Shannon Lamirade
Best business (inside or outside): Len’s Foods (inside)
Best nativity scene: Marvin Bauer
Best Christmas scene (non-nativity): Warren and Sharon Campbell
Best Burdett: Dorothy Thacker
Best rural: Lorne and Juanita Schlachter