Where it all began for Reimer and wife 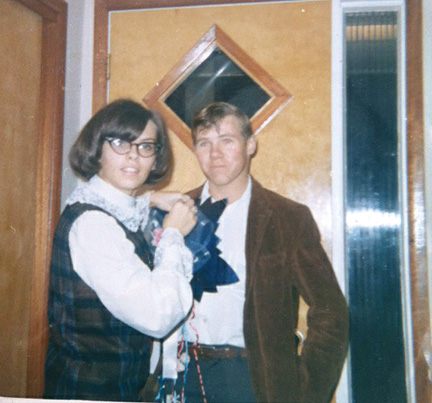 PHOTO SUBMITTED BY ERNIE REIMER - Pictured is Sharon pinning a corsage on Ernie Reimer's lapel before they headed out to a Sadie Hawkins dance in 1968.

By Carlie Connolly
Getting eloped in 1970 when times were different than they are today, Ernie Reimer and his wife, Sharon know what it takes to be married for 45 years.
It all began in Brandon, Manitoba in 1968 when one of Sharon’s girlfriends had a crush on one of Ernie’s friends who lived down the street from them. One day, her friend noticed them driving up the street, and there was a mailbox at the corner and she told Sharon to pretend they were mailing a letter when the guys drove by. She went along with it, and the boys stopped the car. Ernie was in the back seat, noticing Sharon. They locked eyes and two days later they went to a drive-in.
“Seven of us piled in our big old boaty car and we went to the drive in. There were four girls and three guys and after that it was history,” she said.
They moved out to Redcliff in 1972, leaving their families behind, not knowing a soul. They found the only place they could, as that was a time when the boom was on. They lived in a basement suite for around a year until they found another place.
“It was strange. 500 miles didn’t know a soul. I guess we were just too young to know any different.”
Through trials and tribulations along the way, they got through it together. Sharon said marriage is all about discussion, forgiveness, respect and spending as much time as possible with one another to keep the relationship alive.
“We always felt that our kids were first and foremost. We had three kids in about four and a half years. And we always tried to do for our kids what we could because we grew up where our parents it was always work and there was no time for fun activities,” said Sharon.
Ernie said that one of the biggest struggles that contributed to stress was a shortage of money then and now. In his opinion, money is still one of the biggest stresses today when getting married, but he and his wife got through the struggles with communication.
When it comes to his favourite in his wife, it’s that she is a friend, companion and someone that he can talk to about anything.
“Companionship probably now would be the main driver. It’s your lifelong friend. You make you that commitment when you get married and I believe in that,” he said.
A lot has changed over the years from when they were together. Ernie said that nowadays people like to try out different personalities. He said a lot of people are meeting in bars today, whereas back in his day, a lot of ladies couldn’t go to bars on their own. They had to go with someone. In the bars, men couldn’t sit in the same section if they were single as the women and their partners, and so they were segregated.
The one thing that of course doesn’t occur much today are handwritten letters, but Sharon has held onto hers.
Back when she met Ernie, he was going to school in the Paw in Manitoba for his millwright trade and they saw each other the odd time on the weekend, but they wrote letters all the time to one another.
“I’ve saved the letters, I have them all. I couldn’t part with them.”