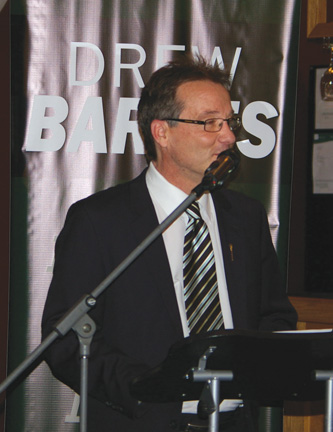 Cypress/Medicine Hat MLA Drew Barnes announced on Feb. 26 that he would be running in the Wildrose Party leadership race, with the selection date set for March 28.

By Carlie Connolly
In a surprise announcement to the public on Feb. 26 at the Paradise Valley Clubhouse, Cypress-Medicine Hat MLA, Drew Barnes announced that his five year journey as a Wild Rose member will continue as he will be running for the leader of the party.
When he decided to run for the Wild Rose Party five years ago, he went straight to the policies of the Wild Rose that include free votes, fiscal responsibility and grass roots party.
“My goal as leader will be to engage all of the membership as much as possible and really listen to Albertan’s, talk to them, and then act from there of course.”
He said that the 24,000 members of the Wild Rose care a lot about Alberta, believe in fiscal responsibility and are looking for a government that can provide more effective and efficient programs.
He brought up Dec. 18, the day when many were disappointed at the number of people who crossed the floor from the caucus. It was that day, that Barnes told the party executive that he was interested in his decision to run for leader.
“We’re ready to present some really good choices and some really good ideas for Albertans,” he said.
With being a long time resident of Alberta since 1974, Barnes said that he can bring his knowledge of the province along with his knowledge of the business world to the table, having owned business in ranching, construction, storage and rental property.
“I understand how bureaucracy can weigh a business down.”
Many were present at the big announcement including Barnes’ family, long time friend, Lorne Swalm, along with Linda Phillips, employee of the Medicine Hat Diagnostic Laboratory.
Barnes asked the people present to look at the Wild Rose more carefully, as a better option focusing on financial responsibility, trust and integrity, local decision making and the elimination of waste and favouritism.
“In many ways, I’m asking people like you all here tonight to give me your support. Albertans that helped build the Wild Rose and never left it.”
He touched upon what was important to him, including his mom, three sons, five brothers and sisters and his wife that have all supported him along the way.
“Long before I was a politician, I was a local business person. I owe a huge debt of thanks to my employees and my partners who have done such an excellent job of running my ranches, construction companies, storage and rental properties.”
He is very happy to have been the representative for Redcliff, Cypress County, 40 Mile County and Medicine Hat, and is proud to remain supportive of the Wild Rose.
Barnes said that in talking to Albertans, they have touched upon what is important to them including a smaller more efficient government. They also want less bureaucracy, which Barnes said they face when having to run a business in Alberta. They want health care that works.
“The waste and the waiting times are absolutely ridiculous, its time do something about this. Instead of throwing more money in it, lets measure the outcomes and lets make it work,” he said.
His supporters also mentioned rural property rights along with affordable utilities as important topics to consider.
“Last people tell me, they want to see more democratic accountability and trust. Tired of the scandals, tired of the entitlement, its time to reengage Albertans by running the best government inside and outside of the legislature.
We must build our constituencies, present our ideas, and if Albertans again grant us opposition, we must continue to be their most effective opposition that Alberta has seen in 110 years. And if we do that work, and if we make the right decisions, if we present the right ideas, friends, we can be government someday.”