Lots of support behind Barnes 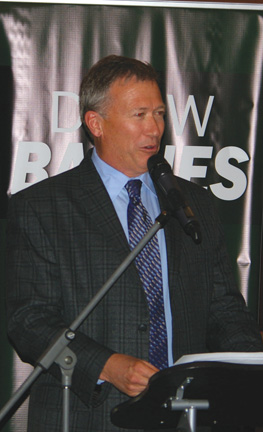 By Carlie Connolly
In the packed room at the Paradise Valley Clubhouse in Medicine Hat, Drew Barnes announced that after five years of being a Wild Rose member, he will continue on his journey, and run for the leader of the party.
Many people were present for his announcement including John Carter, the host for CJCY Radio, long-time friend, Lorne Swalm and Linda Phillips, employee of the Medicine Hat Diagnostic Laboratory, who all gave their support of Barnes’ work over the years.
Phillips who has been an employee at the Medicine Hat Diagnostic Laboratory for over 25 years said that she had never considered herself a political person or had faith in politicians worrying about the little guy, but said that changed when she met Barnes.
At the time when the staff had received the news on the closure of the laboratory by Alberta Health Services, she was there to speak on the government impact it would have on the community, staff and families.
“Drew approached us that night and on several occasions since to try to find the answers and understand this decision; a decision which will result in the community losing the expertise of our highly skilled laboratory technologists and support staff,” she said.
Barne’s took action and got in touch with Alberta Health Services, the honorable Steven Mandell and the premier to investigate the decision many Albertans were disappointed with.
“Drew has proven to myself, the staff of the diagnostic laboratory and the community that we serve that he has integrity and never waivers in his beliefs or convictions. Drew has experience on a rural and urban level regarding many issues.
The superboard of AHS  is one of the government decisions that Drew is against and wants healthcare to return to a more regional government. He has personally proven he is very committed to the people he represents and will not stop fighting and investigating issues he feels do not reflect the best interest of those same people.”
A long-time friend of Barne’s, Swalm was also present to give a speech to praise him on his accomplishments and success, beginning by saying that the Wild Rose was founded for the purpose of keeping the government and check and to possibly form government one day.
He said that with some of the members deciding to cross the floor back in December, it provided a great opportunity to rebuild the party with principle people who are conservative in their approach to the economy, policies and life in general.
“I believe Drew Barnes fits this bill perfectly,” he said.
Swalm and his wife built a strong friendship with Barnes years ago, when their sons played hockey together. With Barnes being married to his wife of over 27 years and being an active father to his three boys, Swalm pointed out his dedication and devotion to his family that ties in greatly to the Wild Rose.
“There are inevitable hardships and challenges that occur in relationships and parenting. Drew has proven he is no quitter; not with his family, not with his farm, not with his businesses and not with his commitment to the Wild Rose Party,” he said.
Swalm also pointed out Barnes’ being appointed the opposition critic in seven areas of responsibility including finance, education, advanced education, human services, infrastructure, transportation and environment and sustainable resource development. He said that when it comes to his experience in urban and rural issues, its very impressive.
“Drew knows what its like risking his own money, leading his business endeavors, managing people and meeting a payroll. All of these qualities are all too often lost to the career politicians and bureaucrats.”
Among the people their supporting Barne’s, Mayor of Redcliff, Ernie Reimer was one of them.
“I support him, I like him, he’s here, he’s there, he’s everywhere,” he said.
He and Barne’s have known each other for a few years and Reimer said that he believes we need some opposition.
“I think its time that we had a change. I think change is good.”