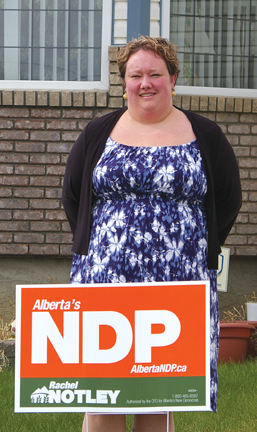 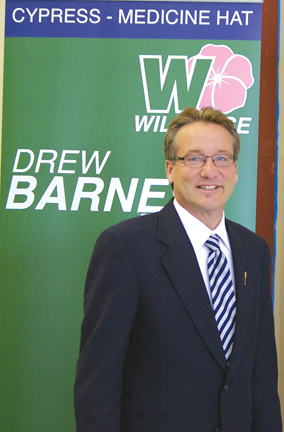 Drew Barnes, candidate for the Wildrose Party, said PC government broke promise to rescind property rights laws, says the biggest challenge in the riding is the current state of the economy. 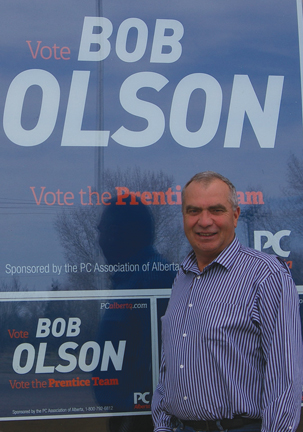 By Carlie Connolly
Heading to the polls May 5, candidates in the Cypress-Medicine Hat riding have been busy campaigning, getting ready for the big day.
For Drew Barnes, incumbent for Cypress-Medicine Hat, the early election call wasn’t a shock.
“Not only have the PC’s broken their promise to rescind the laws that grievously affected our property rights, here they are breaking an election law that they put in three years ago saying they would only do this every four years,” he said.
Having lost his run for leadership of the Wild Rose, Barne’s said he is happy to work with the new leader, Brian Jean. Even though he lost, he said that he is happy to have made several contacts and supporters throughout Alberta, and will continue on with his work.
The challenges he sees that are facing Cypress-Medicine Hat currently are the economy.
“The PC government has not put in a taxation and an economic situation that allows business to flourish,” he said
Other challenges are the new budget, and tax increases at a time where families and agriculture can least afford it, which Barne’s said is totally wrong. Another is the government over spending.
“I think what a provincial government should do is keep tax rates low and competitive, keep bureaucracy minimal, keep utility rates stable and low and enhance property rights. That’s what a government needs to do to stay out of the way to attract economic development and diversification for an economy.”
Alberta New Democrat, Bev Waege, who is a first time candidate, has been busy traveling around meeting many people. She is a grocery store worker and is active in her union.
One of the major concerns to her is healthcare.
“I’m not exactly sure in Edmonton, but sometimes here at the hospital in Medicine Hat, it’s a four hour wait to actually go in and see a doctor,” she said.
To fix the concerns to health care, she said there should be improved wait time, more doctors, more specialized care and better care, especially for seniors.
With working and campaigning, Waege said that she will bring forward a lot.
“I’m hardworking, I volunteer in the community, so it keeps community involvement and I work hard for the people of my constituency.”
Bob Olson, who is a candidate for the Progressive Conservative Party said that he has always enjoyed working with people, which stemmed from his days as Cypress County’s former Reeve.
“I’m quite pleased with the response I’m getting from everybody; I just really enjoy the people part of it. The campaign is also going well,” he said.
One of the concerns he pointed out is the hospitals in Alberta Health Care.
“Rural and urban, they use the same hospitals, they have the same waiting time and all of that stuff has to get looked at without a doubt,” he said.
With this being close to 47 percent of the provincial budget, which he said is quite high, he said that they need to get that streamlined.
“We have that team almost in place and that’s the direction that we have to look at for all of the people in our riding.
We’ve got a plan that’s not only in the budget. We’ve got a 10-year plan through Mr. Prentice and it’s opened, its transparent and workable, and that is what we’re looking at.”
He said that we continually here about the 44-year term of the pc’s being in government and that none of those original people are still there.
“The people of any government are what makes a difference, not the party itself, it’s the people that are in that party, and we have the people in the right party now to make a difference through Albertan’s and we’ve got an excellent opportunity to demonstrate that.”