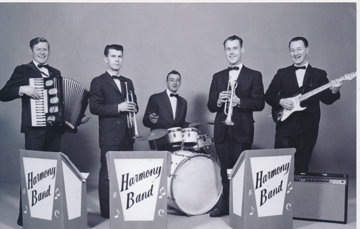 Submitted by Fred Hauck
I had read recently of the closing of Levinson Music in the Medicine Hat News. Levinson Music originally under the ownership of Joe Levinson had been around a long time, it will be remembered fondly just like many from the past like Fykes Music, McMorrans Musicland, Classic Keyboards and Flemings Musichouse. Musicians and music in Redcliff and area go back almost as far as the town’s start. One of the earliest bands was the Redcliff “Citizens Band,” this was a group of local musicians, who back in their teens got together to play for town functions and celebrations. The town’s first Postmaster and druggist CT (Doc) Hall played the clarinet in the band, he also played the violin. All of the musicians wore matching uniforms and played on a volunteer basis.
Some of the town’s more prominent musicians over the years will still be remembered. Two brothers, Alf and Tom Dutton were very musical, Tom played the saxophone up into his 90s, and at one time had his own group and later played with a group of seniors called the Seoringing 7. They were all residents of the Teaota Seniors Lodge, Alf was Redcliff’s Mayor and very proficient on the banjo and also on an instrument of his own creation called the Onestring Pitchfork Candypail. This instrument is on display at the Redcliff Museum in case the name has got you puzzled to its appearance.
Jack Hope was a very good Western Music singer and expert Yodeler. He accompanied himself on the guitar and even had his own show on CHAT TV “The Jack Hope Show.”
Ruban Derheim was another Country and Western singer of note, he played guitar and entertained in the area for years, often with his daughter Marjery as far back as the 1950s. They also played on CHAT radio and also with a group called the Western entertainer.
Fred and Laura Vosseler were a musical husband and wife team. Fred played the accordion and Laura played the banjo with a group called “The Hillsiders.” They could often be herd weekends at the Redcliff Legion. Fred could fix accordions.
Father and son, Stan and Ralph Purden  were long time Redcliff residents. Stan played the saxophone and violin, while Ralph played the saxophone in the 1950s with a group called the Swing Tears. Jack Hope played the drums in the group, Ralph decided quit playing for dances early on. He later took up the saxophone in retirement and played for the Anglican Church on Sunday mornings.
Colleen McKay was a Redcliff piano player, who often would accompany local Medicine Hat and Redcliff musicians. As a young woman she could be heard on Chat radio’s “Little Glass Town of the West,” radio program on Sunday afternoons along with other Redcliff residents.
Some of my relatives played for country dances both at the Lake Valley and Bowell Schools. My grandad Fred Hauck played the violin and banjo. My dad’s two uncles Albert and Clearance Seafried along with cousin Oscar played banjos, violin and guitar.
A more recent group is the “Harmony Band,” they played the old style German music at the Harmony Hall, comprised of Eric Petke on the accordions, the Bounan Brothers on the horns, and Dick VanRiper on the guitar. They finally dismantled when some of the band’s mainstays passed away.
The last young group to get a mention are the Herman Brothers, Greg and Tom, They played and sang country music for years with a group they formed called “Witchataw,” they even played at the Calgary Stampede’s Nashville North stage. They are the only ones from the Redcliff area put out records, two 45’s to be exact where they sang their own compositions. They can still be heard on occasion at local venues. Tim played the steel guitar last year with Johnny Cash’s brother Tommy at the Salvation Army’s church in Medicine Hat.
The St. Ambrose Church will be holding the seventh annual Redcliff Music Collectors Show and Sale from 9 a.m. to 5 p.m. on March 11.