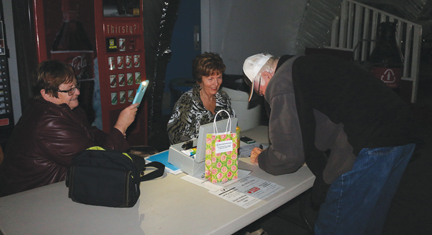 By Jamie Rieger
What was shaping up to be another successful Bow Island/Burdett Chamber of Commerce trade show over the weekend turned into vendors and patrons being left in the dark due to a power outage on Saturday.
The power outage, which affected all of Bow Island, was caused by a tree hitting a power line due to strong winds.
Despite being left without electrical power, the Chamber kept operating the trade show, thanks to portable lighting that was provided by the Bow Island fire department. They also got the message out to the public via their Facebook page that the show was still going on.
“We can’t control the weather and we did post on our Facebook for people to still come out, that we were still open,” said Chandra Lane.
The Chamber did not charge admission once the power went out and Lane said that because, the trade show is their major fundraiser for the year, it would impact their bottom line.
“Things were a little slower. This is our main fundraiser and with not charging admission, we don’t know yet how much this is going to impact us,” said Lane. “Still, people are coming in and they are making purchases.”