Citizens of the Year honoured at Cypress County banquet 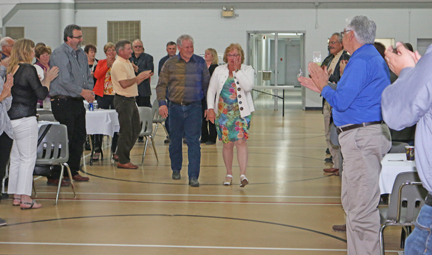 Gary and Elaine Lehr make their way to the stage at the Cypress County banquet, held at Seven Persons Hall last Wednesday evening, to accept their Citizen of the Year award.

By Tim Kalinowski
Last Wednesday evening, Cypress County held its Annual Staff and Volunteer Recognition Banquet at Seven Persons Community Hall. The evening featured a fabulous dinner followed by a riveting presentation on the dangers and causes of ergot contamination, and the importance of protecting native grasslands from industrial development, by local teen Dionne Freimark.
In February Freimark won second prize for the same speech delivered at the Annual SRM Meeting and Technical Conference in Sacramento. The best result ever by a Canadian.
Following Freimark’s speech, the award ceremony began. Cypress County volunteer firefighters and employees received much deserved recognition for their many years of good service to start out the evening.
Later two notable retirees were recognized. Long-time public works supervisor Rick Bleau was on hand with his wife Margo to receive gifts, flowers and well-wishes as he starts the next chapter of his life in retirement. And Bob Olson was recognized with a long applause in appreciation for his many years of service as reeve.
Alluding to his recent loss as the PC candidate in the provincial election, Olson jokingly stated he was now officially retired for the second time. A comment which drew cheers and laughter from those in the hall.
But the absolute highlight of the night was the presentation of the Cypress Courier sponsored “Citizen of the Year Award.”
This year’s worthy recipients were Gary and Elaine Lehr.
Cypress Courier editor Jamie Rieger presented the award. In her comments Rieger cited the Lehrs many years of community service in various capacities. They were particularly recognized for their roles as directors on the Irvine and District Ag. Society Board.
“The recipients of this year’s Citizen of the Year award are hard-working and have spent many volunteer hours serving on various committees and boards, and helping out on with many community events. And can always be counted on to lend a helping hand,” said Rieger.
As the emotional Lehrs made their way to the stage they received a sustained and sincere standing ovation from the crowd.
Elaine Lehr summarized her and Gary’s feelings best in her brief speech after the presentation.
“Volunteering comes from the heart, and it takes a whole community to get projects done,” she said. “This is a real honour. Thank you.”