Election talk over a cup of coffee 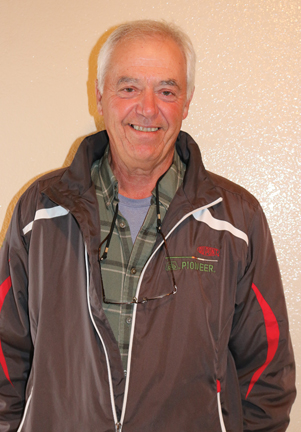 Bow Island resident, Lynn Thacker was one of many local residents surprised by the outcome of the May 5 provincial election.

By Jamie Rieger
The most talked about topic around town last Wednesday was single-handedly the results to the provincial election that took place the evening before.
Happy or displeased with the outcome, the outcome was a stunner, even showing that the pollsters and analysts do not always get things right.
The decision was made fairly early on Tuesday evening, with the NDP Party having been declared the winner, a mere 30 minutes after the polls closed. And closer to home, Wildrose contender, Drew Barnes was officially declared the winner of the Cypress-Medicine Hat riding shortly after 9:00 pm.
With the PCs ousted by the NDP or Wildrose in all but a few ridings in the province, the message was clear. The voters wanted to see change.
The next morning, the patrons at a local coffee hang-out were discussing the outcome and what they see lies ahead for the people in the province.
“There is going to be real repercussions. I don’t think Rachel Notley is about public ownership and I think she will run a middle-of-the-road government,” said Dave Patrick, who added that this will not be a bad thing, but could also be a boost for the province. “I am not disappointed with the results. It was time for a change.”
Lynn Thacker, however hopes that the Notley NDP Party will be a different NDP Party than that of previous British Columbia and Saskatchewan NDP governments.
“In the last provincial election, the Liberals voted for the PCs and the last election was pivotal, especially when they decided to put Redford in. She got trampled in the end. The best thing would have been if the Wildrose had won the last election,” said Thacker. “I really hope there is a new view with this NDP party.”
“When you are idealistic, it is hard to turn away from the NDP mantra which is still to have a merit-based economy,” said Thacker, adding the outcome of the election was a surprise to him.
He also believes a sales tax in some form is in the making.
“I do believe that not having a PST was part of the Albert Advantage, but I hope they go with a Harmonized Sales Tax, rather than a PST.”
Henk Stuut said that if the Notley government does and changes to its royalty structure, he hopes it will work in Alberta’s favour.
“ I hope they do change the royalties; change it so more goes to Alberta and less to Ottawa,” he said.