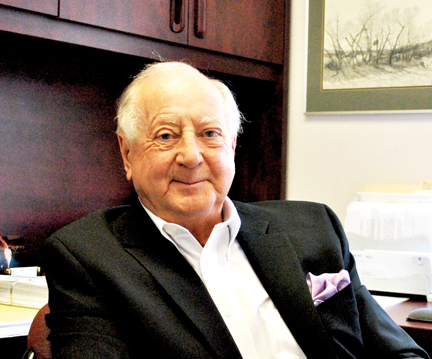 Ivan Becker, president of the Desert Blume Homeowners' Association, says Cypress County is turning a deaf ear to residents in its decision to not change the speed limit in Desert Blume.

By Tim Kalinowski
Desert Blume residents were not happy with Cypress County’s decision to refuse their request to lower the speed limit in town from 50 km/h to either 30 km/h or 40 km/h.
The Council voted against the change by a close vote of 5-3 at their  May 5 meeting. Councillors Geigle, Vossler, Lentz, Pahl and Belyea all opposed the change. Reeve Oster and Councillors Mudie and Hamilton supported the request from Desert Blume residents. Councillor Squire was not present for the vote due to illness.
Ivan Becker, president of the Desert Blume Homeowners’ Association, felt the County was turning a deaf ear to the concerns of local residents.
“They did test (traffic numbers and speed) in town,” acknowledged Becker. “But if it was the will of the people that live in Desert Blume, I think Cypress County should have given it more serious consideration. If it’s what we are asking there is no harm in trying it for a period of six months, and if it successful, let’s just keep it at that speed limit.”
The results of a County sponsored speed sign study and traffic count in Desert Blume showed traffic numbers of about 2,500 during the testing period and an average speed of 32 km/h.
Becker felt the highly visible electric sign was not a true representation of the speed people normally travel through the narrow, curving streets of his community.
“I think people have a tendency if they see a sign they are going to reduce their speed if the sign is visible. When the sign is removed than possibly their old driving habits return again. In Desert Blume the streets are shorter and the distance from one point to another isn’t long, and consequently a speed limit of 30 km/h would be more appropriate than something at 50 km/h.”
Councillors Lentz and Pahl were the two most vocal critics of the change. Pahl felt since the speed sign numbers showed people were already traveling at slower speeds there was no point in changing speed limits in Desert Blume. Lentz advocated for more speed enforcement to catch those who might be speeding rather than making a wholesale change to local speed limits.
“I think if we start getting down our knees every time we have a request we’re going to end up with a real mess. Every hamlet is going to want to have speed limits here and there. It’s going to be so piecemeal that nobody is going to know what the speed limit is anymore. Fifty is the standard. For schools and playgrounds it’s 30 km/h, and let’s leave it at that,” said Lentz.