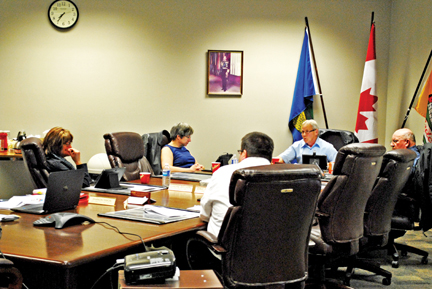 Redcliff town council could not come to a decision on flood mitigation funding at their recent council meeting.

Tim Kalinowski
The Redcliff town council debated a decision to go forward, or not, with two $15,000 engineering studies of the NW Storm System improvement project and the expansion of the Dirkson Industrial Pond project at Monday’s meeting.
Both projects have been identified as being key pieces of future flood mitigation measures for the town.
The two engineering studies, and their price tag, came before council for debate after Redcliff was rejected for Alberta Community Resilience Program (ACRP) grants last month, in large part due to having no specific engineering studies on the long term benefits of these projects included with the town’s application last fall.
The grants being applied for could potentially provide $4.7 million for the storm sewer project and $3 million for the Dirkson Industrial Pond project.
The sticking point for the councillors opposed to spending the $30,000 was there was no guarantee the grants would be paid even if the studies were completed. The town would have to re-apply this fall. Council might be spending $30,000 of taxpayer money for little or no return.
Those who championed spending the $30,000 said even if there were no guarantees of grant money this year, the studies would still be necessary to doing future improvements and expansions on these projects. The cost of the engineering studies would likely go up if council did not choose to pay the $30,000 this time around.
With Mayor Ernie Reimer and only three councillors, (Larry Leipert, Cathy Crozier and Chere Brown), present the vote stalemated with Reimer and Crozier voting for and Brown and Leipert against. Therefore the motion was defeated.
Mayor Ernie Reimer said after the vote, while he could not speak for all councillors, he was personally disappointed with the stalemated outcome. He hoped it would come before full council again to ensure the community’s due diligence on such an important issue.
“We needed to address this because we’ve got these problems with overland flooding and storm sewers,” said Reimer. “We’re getting infiltration into our sanitary sewers so we have to get going on this and mitigate these problems. Unfortunately we only had three councillors here tonight and it was defeated because it was a tie vote. I am thinking we need to address it again when there is a full compliment.”
Reimer acknowledged the financial pressures facing the town, but felt an investment in these two engineering studies of the NW Sewer System and Dirkson Industrial Pond projects would pay dividends for Redcliff residents concerned about overland flooding in the future.
“There was no guarantee on getting the (ACRP) grant,” acknowledged Reimer. “Having said that, the study would be relevant into the future. Either way, it’s going to have to be done sooner or later.”