Traditional trade in a modern time 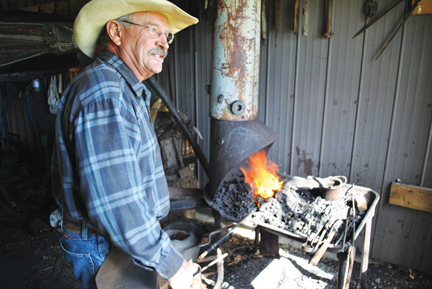 James Underwood of Underwood Forge has been blacksmithing since he was 16 years old.

Blacksmithing still has an allure to it difficult to define in the modern, digital era. Blacksmiths still ply their trade at fairs, museum demonstrations and historical re-enactments all over southeast Alberta and southwest Saskatchewan. They always draw large crowds and see good sales on smaller items such as knives, steak turners or small decorative items.
James Underwood, of Underwood Forge located a file miles north of Elkwater, has been doing blacksmithing in some form since he was 16 years-old. He lived and worked as a mixed farmer near Cabri, Saskatchewan for many years before retiring and moving to Elkwater about a decade ago.
“At first I wanted to learn to forge weld; that kind of fascinated me,” recalls Underwood. “I called a guy who did some smithing up and asked how do you forge weld? He said there was a thing in Swift Current there at some guys place, and to come and have a look. That’s really the beginning of it. So I started doing (blacksmithing) at some guy’s farm. I then got all my own stuff and away I went.”
Underwood has always had powerful, creative impulses. Drawing and doing art were part of his life from an early age. He also became an excellent taxidermist when he turned his hand to that. But it is his love of the forge which has sustained him creatively throughout the years. Unlike other, better known blacksmiths in the area Underwood isn’t much for advertising or demonstrating his skills at public events. His focus is on being authentic in technique and style to the early frontier blacksmiths who plied their trade more than a century ago. He forge welds and uses his finely honed hammer skills to produce these works in an old coal-fired forge on his property. He creates all his own tools and jigs. And uses hand-forged rivets and collaring for his joinery.
The result is iron work which one would be hard pressed to distinguish from historic pieces when placed side by side on a table. In many ways stepping into Underwood Forge is like stepping back in time.
“All my stuff is done with the hammer and hand-forged. It’s all traditional to how it would have been forged 100 years ago. That’s how I like it,” confirms Underwood.
Underwood got more serious about his craft in 1990 when he began to practice it on more or less a daily basis. He read many books on the subject and began to experiment with different techniques and forms. And then in 1998 Underwood had an experience which crystallized everything for him.
“We went down to Dodge City in 1998,” remembers Underwood with a smile. “They wanted a blacksmith for the summer at the Boot Hill Museum there. So I, my wife and one of my daughters went down. We got an old motor home and we lived down there for the summer. That kind of took the blacksmithing to the next level for me because I did it all day, every day.”
After the Boot Hill Museum experience, Underwood began to develop the style he has become better known for over the past decade. Combining traditional hammer and metal forming techniques, a love of nature and a signature long horn and western design motif, Underwood is happy to share his work with anyone who stops by his forge or stays at his guest house.
“I really can’t explain why I like it,” says Underwood. “You kind of got to do it to understand. When you feel the iron move, and you can create things with that iron. You can make it flow like clay. But you only got five seconds to do anything before you need to put it back in the heat.”
For more information on Underwood Forge call 403-893-2490.