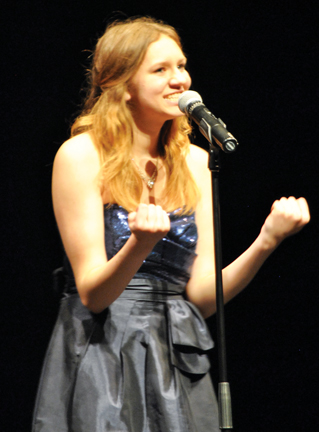 Jade Hafso of Irvine School performs a musical theatre number during Kaleidoscope of the Arts, held at the Esplanade last Friday.

By Tim Kalinowski
We often hear the expression “the arts are an important part of a well-rounded education.” With the yearly Kaleidoscope of the Arts festival Prairie Rose School Division puts its money where its mouth is.
The division offers its artistically minded students a chance to shine on the big stage at the Esplanade and to display their art work in the Esplanade’s public spaces for the entire region to enjoy.
Last Friday the 8th Annual “Kaleidoscope of the Arts” enjoyed big numbers in attendance. This was the first time the event was held on a Friday instead of Saturday. Ann Morrison, the co-chair of Kaleidoscope who suggested the change, said in hindsight it was one of those things which was a no brainer even though it took eight years to figure out.
“This year we moved Kaleidoscope from Saturday to Friday with the idea that teachers could bring classes of students to come and watch the show. Then they come early, walk around, look at all the art work, look at the school art and then they go in and watch about an hour and a half long show. That show repeats three times during the day and it’s the same show in the evening for the parents,” explained Morrison.
Morrison was pleased the showcase of student talent did what it intended: Give encouragement to students who enjoy the arts and allow them to shine.
“We want the students to see what is happening in other schools and we want them to see what’s happening in their own schools,” said Morrison. “We want to encourage them to get involved and then hopefully they will see something here and say I want to do that… This is as important as the curricular things we do at school and it’s as important as the athletics.”
Darlene Keeler, the other co-chair for the event, said while the day was busy on Friday it was well worth it in the end for both the committee members who did the planning and the students who were given the opportunity to see all their hard work come to fruition with such a successful show.
“It’s been a pretty crazy day today,” said Keeler. “The best part about it is seeing the children come and the smiles on their faces after they have performed on the stage or in the recital rooms. And looking for their art work which is out there on display. That is the be all and end all of this whole entire day. The students can say they have been on the same stage as ZZ Top, Ian Tyson and Randy Bachman. Today is there day to showcase their artwork and their performances.”
Over one hundred students from Prairie Rose School Division strutted their stuff on the Esplanade stage and recital halls on Friday and several hundred pieces of individual art work were looked over and judged by the spectators who came in to enjoy Kaleidoscope. And given how many schools in the division brought their students in for the showcase, there was a fantastic atmosphere of encouragement and support for these talented local student performers and artists.