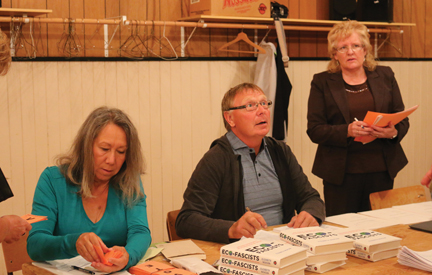 By Jamie Rieger
A group that first started meeting after the imposition of Emergency Protection Order on the Greater Sage Grouse early last year held their inaugural annual general meeting in Manyberries on May 27.
Impacted landowners, industry leaders, and other stakeholders met in January, 2014 to discuss the ramifications of the EPO and how they could collectively move forward with informing the public about the issue and working with all levels of government.
According to one of the group’s organizers, Sustainable Canada Association has made progress in the last year in working with the federal government and in getting their message out that the best stewards of the land are those live and manage it every day.
The progress made has come because of the hard work in informing the public
“When we were invited to the Western Stockgrowers meeting last year, that was when things really got going. They gave us the encouragement that we could do something here and up until then, people kept telling us we couldn’t, that we would hit road blocks,” said one of SCA’s founding members, Ronda Reesor. “Rural municipalities in Alberta and Saskatchewan wanted to see changes and were able to do that at their conferences. This shows that they are listening to their people.”
The Emergency Protection Order for the Greater Sage Grouse has impacted human activity on 1,700 sq. km of public land in southeast Alberta and southwest Saskatchewan. However, the recovery strategy encompassed 2,812 sq. km., including private land. The EPO was the first of its kind by the federal government under the Species at Risk Act.
Late last year, representatives from SCA, along with County of Forty Mile reeve, Bryne Lengyel, First Nations groups, and other affected stakeholders attended a roundtable discussion in Ottawa to talk about the Species at Risk Act, and specifically, the EPO on the Sage Grouse.
“A lot of discussion took place, but the best thing that happened was, through our participation, we were able to express our concern  on the implication of the EPO and making other municipalities aware of what has taken place,” said Lengyel. “Meeting Minister Leona Aglukkaq was very productive; she is very aware of what is taking place, including the captive breeding program, and the hunting season south of the border. For the time being, I think we have the right person in the environmental portfolio; however, with the federal election in the future, we know that the political landscape can change. We will have to work hard to keep our connections open.”
Lengyel said that during the roundtable discussion, Aglukkag suggested she would be open to meeting and working with her provincial counterparts.
He also noted that since that meeting, the County of Forty Mile has been working closely with neighbouring municipalities and is in the process of drafting a resolution with the County of Warner that requests the federal environment minister start rebuilding and improving the Species at Risk Act “in a way that seeks a balance and cooperative approach (economic, environmental, and social) to species protection that focuses on ecosystem protection; limiting impact on agriculture, industry, rural development, and land use in Alberta,”
County of Warner reeve, Ross Ford and councilor, Randy Taylor also attended the May 27 meeting in Manyberries.
“The people of Sustainable Canada are working hard to represent affected stakeholders and bring about reasonable change to the Act. I will do my best to do the same as long as I am reeve of the county,” said Lengyel.
Keith Reesor spoke at the meeting about a tour they took to Montana, where conservation districts, managed by local people, have been in place for years.
“The tour to Montana gave us an insight into how things are being done there. They thought their Sage Grouse populations were increasing in a couple of their counties,” said Keith.
Ronda indicated that SCA is approaching local municipalities about the possibility of putting in place similar conservation districts here.
Consul area rancher, Randy Stokke spoke about a pilot conservation committee that has been set up and includes representation from Sustainable Canada Association, impacted Rural Municipalities, and area ranchers. The goal of the 13-member committee is primarily to act as a buffer between local government, federal government, and stakeholders.
“Our goals are to manage the RM as a conservation district and to ensure funds are better allocated to those who are helping,” said Stokke, adding that a briefing will be held on June 3 to discuss how management will look for these committees.
“We felt that what they were doing in Montana would be a good thing for us,” said Stokke. “It may be a good direction for us to take and it may set a precedent for how species at risk is managed in Canada.”
Cypress-Medicine Hat MLA Drew Barnes also spoke at the meeting, telling the group of his and the Wildrose Party’s ongoing support for SCA and property rights. 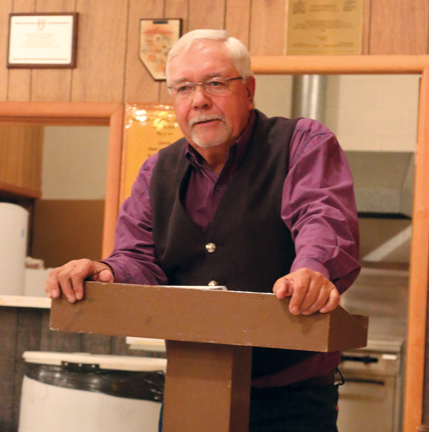