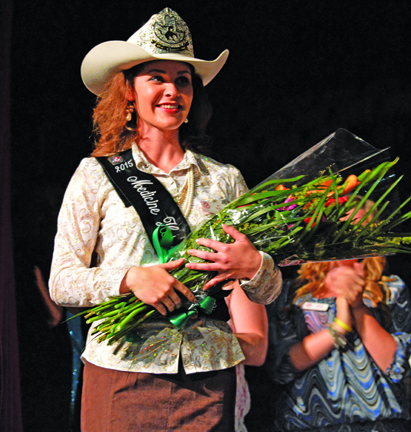 Photo by Tim Kalinowski Ali Mullin was all smiles after winning the Medicine Hat Stampede Queen title on July 11.

The Medicine Hat Exhibition and Stampede has a new Queen. Ali Mullin, originally from Manitoba, won the title over a strong field of local competitors. Makayla Chambers, whose family farms just west of Medicine Hat on the Holsom Road, finished a strong second to take the Princess title. The two women will represent local ranch culture for the next year and will take a starring turn as the Medicine Hat Stampede kicks off on July 24.
Mullin said after the win she has been welcomed with open arms by the Stampede community despite coming from further afield than other competitors.
“I have been wanting to get involved in the rodeo community in Alberta for a long time. I was looking for a place I could run to be a rodeo queen and I had so many friends suggest to me the Medicine Hat community. It blows me away how easily I have been accepted here.”
Makayla Chambers was still having trouble believing she had just won the equally prestigious Princess title after her name was announced.
“I can’t believe this is happening to me right now. This is definitely one of the best days of my life,” said Chambers. “I think the Stampede Queen and Princess is a good ambassador for the sport and a good ambassador for the city.”
Mullin looked like a natural fit for the Queen position throughout the week, showing both effortless grace during the horsemanship competition and a winning personality which engaged easily with rodeo fans. She said she is very aware of the honour which has been bestowed on her and equally aware of the responsibility she takes with her as she spends the next year representing the Medicine Hat Exhibition and Stampede.
“Being a rodeo queen is a great honour and an opportunity to represent a wonderful sport, and not only a sport, a culture,” said Mullin. “It’s something that’s built on more than fast times and high scores; it’s something that comes out of a history that is rich here in Medicine Hat. I think being a rodeo queen is a unique way to portray that rodeo culture to the rest of the world. When I was younger I saw the way they could connect with people and promote the sport I love so much.”