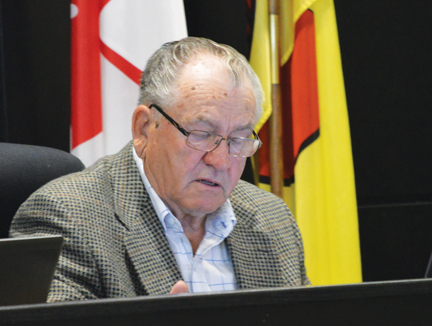 Cypress County councilor LeRay Pahl voted in favour of declaring a state of agricultural emergency for the county last week.

By Tim Kalinowski
Cypress County voted to declare a state of local agricultural disaster due to drought conditions at Tuesday’s meeting. The vote was unanimous after some contentious debate on the subject.
Coun. Garry Lentz thought it was still premature to be passing so sweeping a measure.
“The big advantage to declaring this would be a possible rolling over of tax, and I think that is available without declaring an emergency,” conceded Lentz. “The other thing is ranchers may be able to get some trucking paid for. But I think we are a little premature because one good rainfall could turn this around. A lot of our dryland could produce hay if it got some rain.”
Couns. Pahl, Mudie and Vossler immediately objected to Lentz’s statement.
“I know damn well my hay land isn’t going to grow,” said Mudie. “Provincial and federal governments pay a lot more attention when the county passes something rather than having citizens or citizens groups. So I think we should do as much as we can to support people out there.”
Vossler told Lentz even with current farm safety net programs for producers a lot of local guys may go broke on high hay and trucking costs alone, which aren’t covered by these programs.
“If I have to take import hay from Manitoba and Saskatchewan, or wherever it came from, that would definitely not cover that expense,” said Vossler. “When you get out of the irrigation zone, any of the grass out that way is burnt off, and there are guys looking to disperse cows this year that don’t have enough feed. And, I throw this out there too— the price of feed is absolutely atrocious. So if it does come to the fact that they got to bring it in I know there is a shortage of it. Everybody wants hay, but nobody can find it.”
Pahl reminded councillors when the county chose not to declare such a state of emergency a few years ago local producers lost out on federal relief money for trucking in feed.
“I just think it’s a wise move to declare it now,” said Pahl.
Lentz then said he still felt it was better to rely on existing farm assistance programs from the government before passing a disaster declaration, but would reluctantly support the measure out of consideration for the farmers in the area who are hurting. He didn’t think the move would be met with approval by the province or the feds.
“I can pretty much tell you the government’s response is going to be producers need to participate in these programs so that when something like this does happen they don’t have to get on their knees,” said Lentz.
Reeve Richard Oster then reiterated any such declaration was not binding on the federal and provincial governments.
“We can declare it but it’s up to the provincial and federal governments to carry it forward. A declaration is one thing but it’s federal and provincial that calls the shots.”
Consensus was achieved when councillors agreed such a declaration could certainly do no harm, and draw attention to the farmers who were hurting in the area. There was also the potential for financial help from the government to pay for hay shipping costs if the government recognized the county’s declared state of disaster. And finally once a disaster was declared and acknowledged by the federal and provincial government local produces would become be able to join the Livestock Tax Deferral Provision program. This would allow producers to hold back on declaring 30-90 per cent of their income for this year based on how much they reduce their herd size.