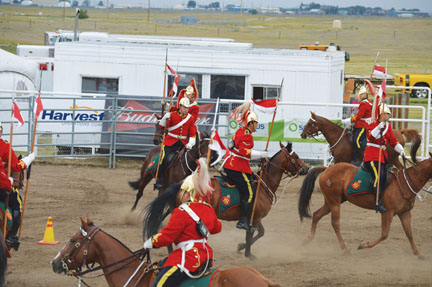 Lord Strathcona's Horse out of Edmonton, put on a great show to kick off the 36th annual Ralston rodeo last Saturday.

By Tim Kalinowski
While the weather was miserable, the 36th annual Ralston Rodeo did not disappoint, providing great bull riding action, gut-busting laughs and exhilarating displays of horsemanship.
Despite a 28 degree plunge in temperature from the day before, periods of drizzling rain and an unforgiving wind, those who came out to the rodeo, most of whom were British military personnel and their families experiencing rodeo action for the first time, were in great spirits and had a keen attitude of fun.
The day kicked off with an exemplary display of coordination and grace in the saddle from the Lord Strathcona’s Horse musical ride. The 24 riders dressed in late 19th century dress reds, gold helms and cavalry boots cut quite a picture on their beautiful bay-coloured mounts. Long lances and swords added to the appeal. However, it was the feats of riding skill which got the audience applauding as the riders maneuvered through a series of intricate passes and turns.
Following the musical ride it was time for the star attraction of the day, the bullriders, to strut their stuff. The Ralston Rodeo changed its bullriding format this year creating a round and shortened arena area at one end of the rodeo grounds to allow spectators to see the bulls at full fierceness in a more confined space. After standing in the cold wind and rain in their corrals for part of the day, the bulls definitely lived up to their hype. The old expression “snorting fire” is very apt. It looked early on as if it might be the bulls’ day before the bullriders rallied to put together some spectacular rides. Bullfighters Jory Vine and Houston Gleason and roper Brett Thomspon had their work cut out for them trying to get the animals back into the pens afterwards, but did a fabulous job.
In the end cowboy Brian Hervey came away with the buckle and the lion’s share of the prize money. It was also easy to see the mostly British crowd’s first experience with bullriding made a mighty strong impression.
The final two fun events for the day allowed for direct crowd participation as soldiers went down arena-side to take up the challenge of the gentlemen’s calf roping and wild cow milking contests. It was hilarious to see teams of three trying to bring down a calf and then later trying to hold a none-too-happy cow and get her calm enough to fill a glass full of milk. The hilarity was heightened by the fact most taking part had never been around a farm animal in their lives and had some difficulty with the notion of getting in there to tie them down or milk them. However, being soldiers, they were of course game and managed to enjoy the experience.
One of the tenderfoots taking part in the events was CFB Suffield’s new base commander Lt. Col. John Scott. Scott admitted to being a bit unsure heading in to face off against a large and unhappy wild cow.
“Being around the animals in this close proximity is an adjustment for many of us. So I’ll get a first hand experience and hopefully walk away with all my teeth,” joked Scott.
Scott said the most important aspect of the Ralston Rodeo was the role it played helping create ties between the base and its neighbours.
“It’s awesome,” confirmed Scott. “This is a nice western introduction for me as much as it is for our UK partners. Even though the weather really isn’t cooperating today, the Ralston Rodeo establishes and opportunity for the folks to come down to the base and see the showcases we have here and have the public interact with some of our soldiers as well as those from the UK.”