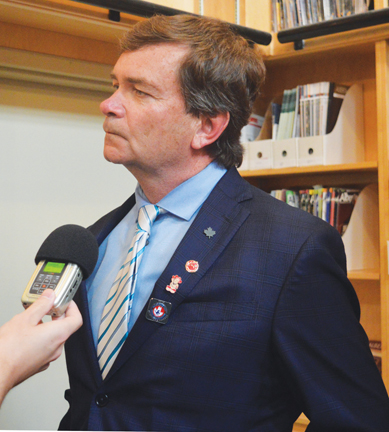 By Tim Kalinowski
Billing his whirlwind tour of southeast Alberta as an opportunity to “meet folks and to listen,” Alberta’s new agriculture and forestry minister Oneil Carlier visited the area last Thursday. As part of his tour Carlier visited the Spitz plant near Bow Island, toured the St. Mary River Irrigation District works in the region and shuttled out to see the damage drought has wrought in local dryland areas. He also stopped by Cavan Lake to view irrigated areas there.
Carlier said the contrast between the irrigated and non-irrigated land was quite telling. However, he went on to say he was encouraged by what he saw of the tenacity of local farmers dealing with the drought conditions.
“Droughts are natural part of the landscape. Our farmers are tough, resilient folk and will have no problem, with a little bit of help, getting through this adversity. We’ll now hope for more rain next year,” said Carlier.
Carlier was asked if what he saw convinced him to reconsider bringing in some sort of hay rebate program for local producers. Carlier said no, but he left the door open to revisit the question again in a few months once the winter forage situation was better understood.
“We have to look at that really closely,” said Carlier. “We have had a bit of rain in the past few weeks. It’s still pretty dry here, but other parts of the province are looking at getting possibly another hay cut. And perhaps even an opportunity to have a little excess. So we will wait a little bit later this season when we are actually on forage, and if we have to look at other programs then we can at that time.”
Carlier pointed to the fact that most Alberta farmers are well covered by established farm safety net programs to make further emergency measures unnecessary for the moment.
“About 80 per cent of our farming community are subscribed to insurance programs through AFSC (Agriculture Financial Services Corporation) and they have quite a healthy reserve fund to pay out payments. I am confident it is doing what it should do.”