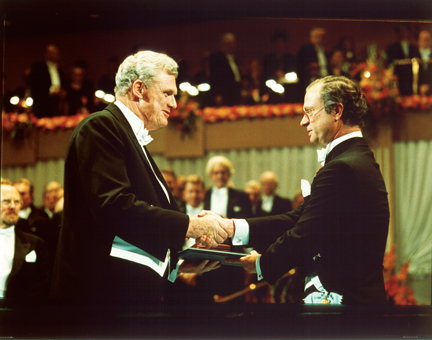 PHOTO SUBMITTED - Dr. Richard Taylor shakes hands with the King of Sweden after winning his Nobel Prize in Physics in 1990.

By Tim Kalinowski
Dr. Richard E. Taylor didn’t start out as being on anyone’s radar to win the Nobel Prize. He was born in Medicine Hat in 1929. His father was a travelling salesman. He grew up like a lot of prairie kids in the area still do. He swam in the river. He hunted gophers. He travelled out for summer holidays to places like Elkwater Lake. In school he struggled mightily with Latin, eventually failing this, at the time, required course. He never officially matriculated from high school.
Taylor’s Alexandra High principle pulled some strings to get him into the physics program at the University of Calgary anyway. At U of C Taylor got another break. The university had convinced one older professor to stick around a few more years to serve the huge influx returning WW2 soldiers entering the college system. It was this single professor, (“a real physicist,” as Taylor calls him), who opened the doorway to Taylor’s later endeavours.
However, Taylor’s academic struggles did not end when he got to university.
“I was in the honours course, which was four years long, and in my third year I was sick in the spring and I wasn’t doing too well mark-wise. So they dumped me out of the honours program and awarded me my three year regular degree instead. If you think about it, we had a pretty good group of guys in that honours program. Only one guy flunked out and he went on to win a Nobel Prize,” jokes Taylor.
Taylor then took his master’s degree and ended up getting a job at CFB Suffield’s military research centre.
“I was playing with flamethrower fuel,” remembers Taylor. “It is very interesting stuff: Gels that are both elastic and viscous. In other words they pull like taffy and pour like jelly.”
However, Taylor decided to turn down a long term position at the base.
“I didn’t feel any moral problem working on weapons, but I guess you would say it was just a matter of taste. If you are going to spend your whole life in something learning how to kill people is probably not the right thing for a guy to do,” explains Taylor.
However, while at Suffield, Taylor was encouraged to start thinking about taking his doctorate.
“My boss there was a physical chemist by the name of Ernie Wiggins. When I got my master’s degree, he said if you are very serious about physics you need a Ph.D..”
So Taylor applied to and was accepted into Stanford University in 1952. He began to write his thesis while doing research at the college’s high energy lab.
“Stanford had some good people there in the 1950s when I came, but it was not a famous institution when I applied,” remembers Taylor.  “It was sort of a country club school, and it was not hard to get into Stanford at all. I never really thought I would be any kind of success in the (physics) field, but I felt I might be of some use.”
Taylor turned out to be an excellent lab technician with a knack for effectively using the intricate workings of a particle accelerator. This expertise led him, as young post-doc at the age of 29, to being sent to France to help set up a brand new accelerator there. He spent three years in France before returning to take up a tenure position in Stanford’s brand new Stanford Linear Accelerator Center (SLAC). That was in 1962.
In 1967 he and his team made the big breakthrough the physics world had been hoping for.
“We had built our accelerator because Hofstader (Nobel Prize winner 1961) had used a smaller accelerator and seen that the proton had a specific size and structure. The high energy accelerator at Stanford was built to try and look at that structure. We were very disappointed when we didn’t find anything in the early stages. We had to wait for the so called “deep inelastic,” (the mathematical model which defined the measurable scatter effect when an electron is shot at a proton or neutron). From there it grew to where we realized we were hitting up against the quarks. Quarks had been suggested in 1963 but no one had conclusively proved they existed until we did in 1967.”
Quarks are the smallest structures of the atom found within protons and neutrons, and so the smallest things at the base of all matter. It was a massive discovery. However, the group did not receive their Nobel Prize until 23 years later.
“The reason why the Nobel Prize took a long time to come is most of the work was gradual. The Europeans had a different theory and they really didn’t believe what we were finding until a German scientist found another kind of quark: The Charm Quark. If you found another quark it was clear the first three we found were there. The median time for Nobel Prize recognition is about 17 years after a discovery is made. It took about 20 years in our case.”
In 2003 Taylor officially retired from physics after a long and distinguished career. He looks back fondly on the very unlikely academic career of an average student from Medicine Hat making it all the way to the highest echelons of science.
“I really like the way my life went,” confirms Taylor. “I had a wonderful time. My wife and I went to France for three years. We went to Geneva one year. We went to Germany one year. I was on a Japanese committee and went to Japan a lot for a few years. We have really trotted around and basically seen the whole world north of the Equator. We have had a really nice ride.”