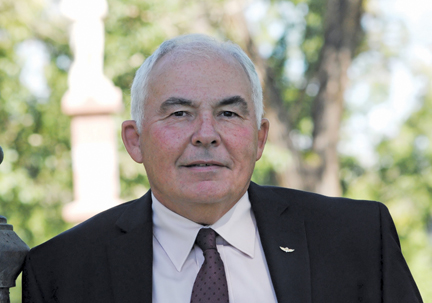 Former Cdn. paratrooper John Turner will be running as an Independent for the Medicine Hat-Cardston-Warner riding in the upcoming federal election.

By Jamie Rieger
Fomer Canadian military man, John Turner has thrown his hat in the ring to run as an Independent in the upcoming federal election.
Turner said part of the reason he is running is to make MPS a little more accountable to their constituents.
Turner was asked the same questions as the other candidates who were questioned prior to Turner entering the race:
1) The southeastern Alberta economy has been particularily hard hit during Canada’s latest economic downturn, especially with the fall of oil prices. Personal debt is skyrocketing and people are struggling to find jobs. What do you plan to do to help get Canada back on its feet again and people back to work?
“People are worried about their mortgages and how they are going to pay the bills. Our politicians need to show a little personal restraint themselves,” said Turner, who said he would distribute his daily stipend to food banks throughout the constituency.
2) The low Canadian dollar is hurting local farmers and businesses who are experiencing increased input costs due to price adjustments to account for a stronger American dollar. Do you plan to let the Canadian dollar continue to sink as the Canadian government did in the 1990s?
“As an Independent, we have to look at the big picture with the lower dollar. It helps the exporters and tourism, but a lot of our jobs have been exported too, overseas and to Mexico. The Canadian dollar needs to be giving tax incentives to the corporations to bring the jobs back.”
3) With the Sage Grouse protection order imposed two years ago, the federal government put a lot of rangeland leaseholders in a huge straight jacket by imposing a great many restrictions on how they could and could not use the land they had title to. Now we hear conservation groups are wanting the federal government to extend that ban to 18 other species as well, and one of them is the badger. What is the right balance, in your opinion, between commerce and conservation?
“This EPO was way over the top. An MP sitting in Toronto has no idea what is going on here.
4) Senior care and childcare are two of the biggest out of pocket expenses facing people in southeastern Alberta. Do you think the federal government should be providing more direct funding for senior and childcare?
“The MP has to set a precident, that’s what I would give 50 percent back to my constituency. Also, I would want to see free post-secondary education for those going into training to help seniors or children. There are a lot of brilliant people out there who can not afford to go to college. The stipulation would be that they have to work with seniors, children, day care, hospitals or with the handicapped.”