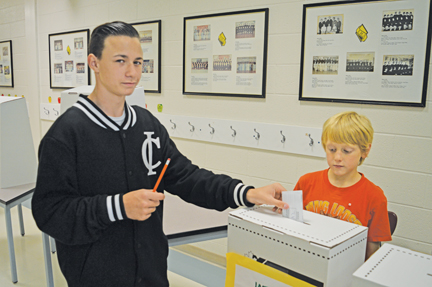 Grade 7 student from Irvine School, Reece Barton was happy to cast his vote at the school last week. Pictured with Barton is Grade 6 student organizer, Deegan Koimosko. Irvine School hoped the exercise would teach the students about the voting process.

By Tim Kalinowski
Irvine School held its student vote last Wednesday morning. The election was organized by the school’s Grade 6 class as part of their Social Studies course. Grade 6 students acted as scrutineers, ballot box attendants and returning officers as their school mates cast their votes for their favourite local candidate. Stuart Shigehiro, Irvine School’s Grade 6-9 Social Studies teacher, said the student election was very important to help his students learn about democracy.
“The Grade 6 curriculum is all about democracy, and the student vote is part of teaching about our fundamental democratic rights,” explained Shigehiro. “We want to get the students engaged too. If we want a higher voter turnout we need to engage the youth. Not just to tell them to vote. This helps create life-long voters, and it will decrease voter apathy in the future.”
Shigehiro also hoped students would take this conversation home to their parents.
“They go home and talk about issues with their parents, and the parents get involved. In return we get more adults out to the polls too. This (student election) gets them interested in politics and they each have their job and they learn how to vote.”
Grade 7 student Clayton Renke was eager to record his vote, even if it was only an exercise.
“My teacher told me about some things each party is doing, and then I kind of just went from there,” said Renke. “It’s been a pretty good experience. I have never even thought about voting before. I thought I would put it off until I am older and get to vote, but this has been pretty good. You were able to think about what you do want (from government) and what you do want.”
Grade 6 student Kassidy Malone acted as a scrutineer for the Green Party’s Brent Smith during the student vote. She took her job quite seriously.
“It’s fun as a scrutineer to show people which way to go and stuff like that,” said Malone. “I have to make sure nobody is cheating and I am representing the person from the Green Party, Brent Smith, to make sure he is getting a fair chance like everybody else.”
She also learned about the importance of voting.
“I enjoy democracy because you have the right to vote and you can vote freely for who you want.”
Grade 6 student Alyssa Zieffle acted as the deputy returning officer for the vote. It was her job to oversee everything and make sure the vote ran smoothly.
“I make sure nobody is cheating and everybody where they are supposed to be,” explained Zieffle.
Zieffle said she has learned from her experience that voting is kind of awesome.
“It’s exciting. I learned that when you vote you get to vote for whoever you want to. That’s kinda cool.”