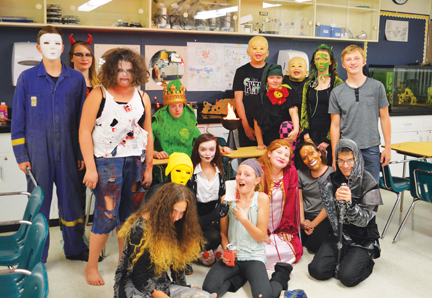 By Tim Kalinowski
Parkside School in Redcliff, like many schools in the county, celebrated Halloween with its student in fun and creative ways. However, Parkside School certainly stands out for its  commitment to the spectral and spooky day, taking that creativity and fun to a whole new level. October 29 was a bellwether day for the school’s Halloween week celebrations. Starting during fifth period, one whole hour was set aside for its student to take part in a Jack O’Lantern carving contest. Each class, depending on its size, were given one or two pumpkins to carve which represent their class. Students jumped into it with gusto carving out the pumpkins’ “guts” and seeds with glee and seeking out the most talented artists in the class to give each Jack O’Lantern the certain sinister glee associated with Halloween.
Later that evening, starting at 6 p.m., the school’s main hallway was turned into a haunted house with student playing the parts of the costumed denizens of this hall of madness. The girls screamed in delight with each frightening spectre, and the boys pretended, unsuccessfully, that some of those screams weren’t theirs as well. The whole haunted hallway brought out the creativity and Halloween spirit of Parkside students.
And to finish off a day of Halloween themed activities the costumed students took part in their annual Halloween dance. It was a great capper to a week of Halloween fun for students as Saturday’s nice weather ensured there would be many Trick or Treaters out and about on the streets of all our local communities.