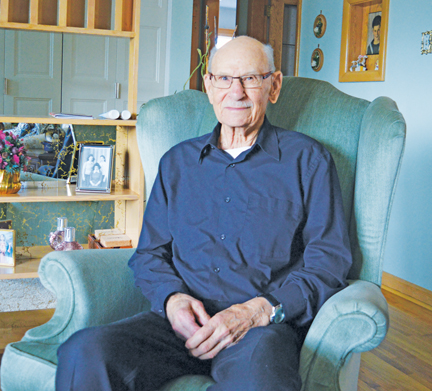 Redcliff Legion member and Second World War veteran, Joe Baier served in the Royal Canadian Navy. Joe was one of hundreds of Redcliff and Cypress County residents who served. Some never returned, making the ultimate sacrifice, and some came back broken. We honour them all this Remembrance Day.

By Tim Kalinowski
Ninety year-old Joe Baier has spent most of us his life in and around Redcliff. In fact there has been only three years in his life when he was ever further than 20 km from his hometown. That was in 1943-1946 when Baier served as an Able Seaman on the HMCS Humberstone, a Castle class corvette in the Royal Canadian Navy, during the Second World War.
He was 17 years-old when he decided to join up.
“In my mind it was important to volunteer. Everybody else was going, and everybody from Redcliff had left already. I figured it was a person’s duty to fight in that war. And when we won it was one of the happiest moments of my life.”
Why Baier chose the navy is a bit more complicated. Baier was a town kid who, like many typical teenagers even today, fancied himself a stylish young man of the 1940s. He particularly prided himself on his well-coiffed hair. He laughs about it now as he rubs his mostly bald head.
“I was in Calgary with the army cadets and got a bit of a taste of it there. We were out on maneuvers one day and it was muddy and the guy there says flop. I said I’m not flopping in that mud. He says you’d flop if there was real bullets coming. I didn’t have worry about all that stuff in the navy,” says Baier with a chuckle.
During the war the HMCS Humberstone acted as escort to bring crucial supplies from Canada to Britain across the dangerous North Atlantic. There was the always the threat of German U-boats lurking just below the surface. While a prairie boy his entire life, Baier never had any real difficulty finding his sea legs.
“I didn’t like the storms,” remembers Baier. “You get those waves 75 feet high and you wondered if you would make it. I was sick for the first five days when we hit a storm the first time we come out on (convoy). I just laid there and couldn’t do nothing. After that I never had any problem being at sea. They could have turned (the ship) right upside down.”
As an Able Seaman, Baier had many duties on the ship such as general repair, ship cleaning and watch. Sometimes though he got to fire the “squid gun.”
“We used to throw like a depth charge. We used to fire three of them at a time off the front of the ship. They were 500 pounds a piece. If we figured there was a German submarine we’d drop depth charges off the bow or off the back. It depended what it sounded like (on sonar). A school of fish sounded the same as a submarine. You betcha we’d drop the charges anyway. There used to be fish flying out of the water all over the place.”
While Baier’s eight ship convoy group never lost a vessel or came under major attack, he says there are other dangers, ever-present, to those who work the seas.
“We lost one guy named Jennings from Montreal. He went over the side in a storm. He was on watch and the flood washed him off. We wore lifejackets all the time with lights on ‘em, but when you are washed over in storm like that…” Baier clears his throat and pauses for a moment as the memory hits him. “By the time we turned around, and looked for him, we couldn’t find him. When you go up to relieve a guy and he is not there it hits you pretty hard afterwards.”
After the war began winding down in Europe in 1945, the Humberstone began making its way one final time across the Atlantic toward home. Baier remembers the sense of ease and confidence he and his fellow sailors had, settling in to relish this last journey together as a crew. A few days out from England they got a potent reminder of the good fortune they had experienced in the war.
“When we were coming back after VE Day we were just cruising along and not even thinking of anything,” Baier remembers. “All of a sudden this German submarine popped out in front of us and gave us quite a shock, but they put up their white flag. They surrendered so we had to hook them up and escort them back to Portsmouth, England. So we took them back and Portsmouth took over from there and started home again.”
Baier was about to ship out with the HMCS Kincardine, (he had volunteered to join the Pacific war effort), from B.C. when word came the Japanese had surrendered. Baier briefly thought about staying in the navy, but figured he had had enough adventure and went home to marry his sweetheart Anne. Baier eventually apprenticed as a plumber and worked in that profession for 31 years before retiring to Medicine Hat. He has been a Redcliff Legion member for over 70 years.
“It was quite an adventure and I enjoyed it actually,” says Baier thinking back on his time in the war. “I think it wouldn’t hurt some young people to get into it. In the service they would get straightened out in a hurry, I tell ya.”