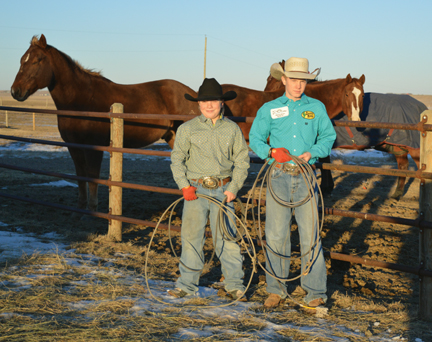 Brothers Hudson (left) and Walker Long push each other to excel at dummy roping and succeed. Both wish to be rodeo cowboys one day.

By Tim Kalinowski
Two Irvine area kids are already making their mark on the rodeo and roping world. Brothers Walker and Houston Long finished first and second place respectively in their age categories at the mid-November Canadian Champion Dummy Roping competition in Edmonton. Thirteen year-old Walker has been roping since he was two and 10 year-old Houston has been dummy roping since he was four. They have completely dedicated themselves to their chosen sport, says their proud dad David.
“This is basically the only sport these boys do. This is 24/7; eat, breathe and sleep. Both my boys take pride in it, and they are natural. We take these kids all over Alberta from Barrhead to Cardston to go to these junior rodeos and ropings. The level of competition there is unreal. We also took them to the world championships in Las Vegas last year.”
Walker’s winning throw in Edmonton measured an astonishing 27.6 feet on a 30 foot rope. The ropers start at a mark closer in and have to rope both horns on the dummy to count a score.
“You have to rope the two horns on the dummy,” explains Walker. “You have to catch three in a row. And if you step on or over the line it doesn’t count. Once you catch three in a row, you go to the finals.”
Houston is no slouch as a roper either. Last year he won first in his own age category at the Canadian Champion Dummy Roping event. This year he was a close second. He explains the secret of successful roping while dad and Walker nod in agreement.
“Most of the time in the summer you should be out on the dummy. If you have any free time the rest of the year you should be practicing. The release where you are throwing to is really important. And with the swing, you don’t want to have a stiff arm. You want to have it nice and loose in motion.”
Walker says he and Houston are not above a little competition amongst themselves. It pushes each of them to do better.
“Sometimes there’s tension,” confirms Walker. “And sometimes there is trash talkin’. I like to try and throw him off his game a little bit.”
Houston doesn’t usually let it faze him. He says if you can’t take that level of competition, you won’t be successful as a roper in the “big leagues.”
“You have to be practicing and making sure everything’s right before you release,” says Houston. “Because if you are just doing half of the job and not doing all of it, when you get up to the big leagues, you are probably not going to have that habit and you are not going to do good at it.”
Both boys aspire to be professional rodeo team ropers one day, and already take part in junior rodeo to further that dream. They get professional roping instruction every summer on their dad’s farm. The hours of practice are already paying off for Walker, who landed his first two sponsors this year with Blue Sky Veterinary Services and Cactus Ropes.
David says he will help his boys achieve their dream in any way he can.
“It’s hard to describe how I feel. When they do what they do, and they come out successful, it’s awesome. But when it isn’t successful, it’s hard. It’s hard to succeed at this. It takes hours and hours of practice.”