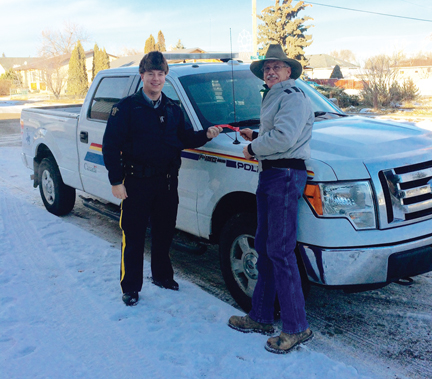 By Jamie Rieger
‘Tis the season to celebrate and indulge, but the Bow Island/Foremost RCMP are encouraging people to take alternative transportation if they have been drinking.
“People should plan ahead. Make arrangements for transportation or spend the night,” said Cst. Jarom Leafloor.
A provincewide RCMP Checkstop blitz early in December, conducted at 259 different locations checked more than 20,500 vehicles.
While there no impaired drivers charged in the Bow Island/Foremost area, there were 46 motorists in Alberta charged with Impaired by Alcohol (down from 70 from 2014). In addition, there were 73 roadside suspensions due to alcohol (up from 71 from last year), and 34 roadside suspensions due to drugs (up from 24 from 2014).
“We are seeing more driviers behind the wheel who are impaired by drugs,” said superintendent Ian Lawson, Officer-in-Charge Alberta RCMP Traffic Services. “ Albertans of all ages need to understand that driving after using drugs, even prescription drugs, can be just as dangerous as drinking and driving.”