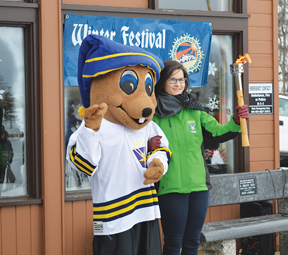 By Tim Kalinowski
Elkwater’s second annual Winter Festival served as the official kick-off to Alberta Winter Games week in southeast Alberta on Saturday. The weather was not the best for the event with gusting winds above 60 km/h at times. At 11 a.m. when the Winter Games launch ceremony was just about to start a brief power failure occurred, likely as a result of the high winds. Later in the day it even hailed a little as a fierce storm cell moved through the region.
The weather likely had some effect as there were a fewer number of winter festival celebrants this year compared to last. However, organizers did not let weather deter them from putting on a nice family friendly event which featured tobogganing, a luge run, cross country skating, horse-drawn sleigh rides and a marshmallow and hotdog cook-off at the fire pit up near the Elkwater Amphitheatre.
Connie Matson, chair of Winter Festival committee, said there was nothing anyone could do about the weather but make the best of it.
“Well, we have snow,” said Matson looking on the bright side. “We are very thankful for the snow, but the wind can calm down anytime… I think WinterFest brings a lot of awareness to get kids outside and getting them active.”
Ron Webb, chair of the local Alberta Winter Games committee, said he was thrilled to come out and support Elkwater’s WinterFest and to take part in the official torch-lighting ceremony, which included bagpipes, a military honour guard and speeches from dignitaries, on Saturday.
“It’s extremely exciting to take part in this kind of launch ceremony. It gets people interested in the Games. It’s also an opportunity for families to come out to Elkwater and participate in a great family day at the Winter Festival.”
Weather has been a big factor in the Winter Games already this year. It was announced late last week the biathlon event was being moved from Elkwater to the Medicine Hat Rifle Club and being turned into a running and shooting race due to a general lack of snow at the Elkwater rodeo grounds. There was still the possibility that the cross country ski event could be cancelled altogether, with organizers set to make a final decision late Monday or early Tuesday. Webb said the inclement weather on Saturday at Elkwater was par for the course with other weather related problems the Games have been having lately.
“It’s a matter of checking every day for the weather forecast… We are confident everything will be great on the (Hidden Valley) hill, and we’re still looking at the cross country event to see what our alternatives are.” 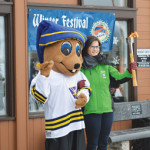 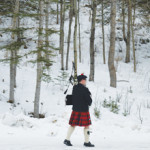 PHOTO BY TIM KALINOWSKI – Piper Matt Acton of the South Alberta Pipes and Drums practices prior to the Winter Games launch on Saturday. 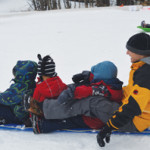 PHOTO BY TIM KALINOWKSI – The Reinhardt and Mohammad families teamed up for a group run down the hill at Winterfest.