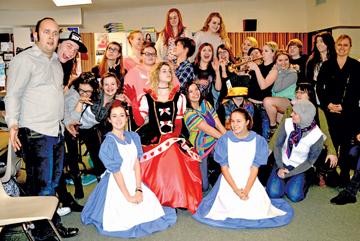 PHOTO BY TIM KALINOWSKI - The cast of Eagle Butte's "Alice in Wonderland" invite everybody to take in their zany, family-friendly play at the Esplanade, Feb. 25-27.

By Tim Kalinowski
Eagle Butte High School drama will bring Lewis Caroll’s zany and timeless story of “Alice In Wonderland” to life at the Esplanade Feb. 25-27. About 80 cast members and crew have been rehearsing the musical play since November. According to director Scott Raible the play is similar to the original Caroll books and the Disney cartoon adaptation, but with a bit more pizzazz.
“Those who are familiar with whatever version of ‘Alice in Wonderland’, they are going to see their old familiar favourites,” explains Raible. “So Tweedle Dee and Tweedle Dum, Alice, the Queen of Hearts, the Mad Hatter… But they are also going to discover some other fun characters from the original books. This play is meant to be fun for the whole family. It has a little bit of the old Vaudeville style of theatre. When people come out they will be able to see some wonderful dancing and interaction between the characters. And some old nonsense jokes as well.”
They play will feature two different Alices, Hannah Pohl from Redcliff and Sydney Blatz from Dunmore. Pohl has been singing in choir, the Medicine Hat Rotary Festival and other musical theatre productions in the area for many years.
“Alice is a big role,” says Pohl. “They are hard shoes to fill. The play is about two hours long and one person singing for two hours straight (over four performances) would be pretty tough. You have to have time to let your voice rest or you are going to kill your voice. It’s not just the singing either: There’s the acting and the dancing. It’s just easier to share the role.”
Blatz has also been singing for several years, but this is her first starring role.
“It’s a new experience for me having this big of a role,” says Blatz. “So it’s kind of terrifying, but I am really excited too.”
Stephen Brooks from Redcliff plays the coveted role of the Mad Hatter in the play. He’s an Eagle Butte High School drama veteran who previously played the villain “Clayton” in last year’s production of “Tarzan.” Playing such a much-beloved and well-known character like the Mad Hatter has it challenges, admits Brooks.
“There’s a bit of pressure. Yes. I was in ‘Tarzan’ last year, and I was the villain. Everyone remembers the villain but they take more from the heroes. With the Mad Hatter you are the comic relief, and that’s a character people like to love… I think it’s a lot of fun because I am pretty much insane every other day, and now I get to act that out on stage,” jokes Brooks.
Opening curtain for Eagle Butte High’s “Alice in Wonderland” will be 7 p.m. nightly at the Esplanade. There will also be a Feb. 27 matinee at 1 p.m. Tickets are $15 each and can be purchased at tixx.ca.