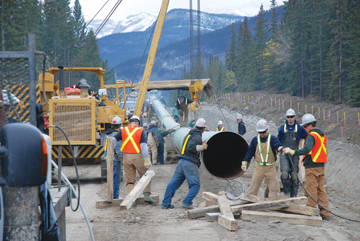 It’s time for a new conversation about building pipelines in this country – a conversation about how Canada can get full value for its oil production while at the same time addressing environmental concerns, including climate change. This dialogue needs to take place with the type of constructive, interest-based, problem-solving approach that Canadians expect.
Getting Canadian oil production to market safely and in a manner consistent with the environmental values we all share is foundational to the pipeline discussion. We know that addressing climate change is part of that focus. The federal government recently announced additional principles it will consider, along with the recommendation of the National Energy Board, before approving a pipeline project. One of the principles involves an assessment of the greenhouse gas emissions from pipeline projects, including emissions associated with the production of the oil the pipelines will carry.
We believe Alberta’s new climate plan will be strong evidence in the federal government’s assessment. The development of the Alberta climate plan benefitted from consultation with a broad range of stakeholders. The plan reflects a fundamental shift, acknowledging that polarization and conflict is not constructive.
Currently, we are all focused on the proposed expansion of the Trans Mountain Pipeline system now in the final stages of regulatory review. If approved, this project would provide a vital link between Canada’s vast oil resources in northern Alberta and world-class marine facilities in British Columbia. As producers and refiners of Canada’s oil resource, we believe approval of this pipeline project would launch a new era in export opportunities for the country and its energy industry.
Overdependence on the United States as our only major customer has forced Canada to sell its oil at discounted prices for years. With access to Asia and other global markets, where prices are typically higher, we will have the opportunity to receive full value for Canadian energy exports. Approval of the Trans Mountain expansion project will benefit more than just the producers who plan to ship oil on the pipeline. It will provide significant economic potential for the entire country. The construction and long-term operation of this key infrastructure project will provide lasting benefits for all Canadians.
Assessments from a number of independent financial institutions have concluded that Canada is missing out on billions of dollars a year in revenue because of our lack of access to overseas markets for our oil. Investment dollars go to wherever they can get the best returns. That’s why opening up West Coast marine access for Canadian oil is crucial to the long-term success of the country’s energy industry and to the strength of the Canadian economy overall. The latest research from the Conference Board of Canada projects the Trans Mountain expansion project would generate more than 800,000 person years of employment over the next 20 plus years and nearly $47 billion in government revenues, which would help pay for services such as health care, schools and infrastructure to transition to a lower carbon economy. Those are benefits that would be realized across the country.
The Trans Mountain expansion proposal is undergoing a rigorous review by the National Energy Board, which has already placed 150 draft conditions on the project that must be met by Kinder Morgan Canada before construction or operations can begin. The company has spent thousands of hours consulting with and listening to local residents, stakeholders, landowners and Aboriginal groups. The project will adhere to the highest operational and environmental performance standards.
Furthermore, Kinder Morgan has committed to continue to work with communities, stakeholders and the province to ensure a world-class response to potential marine spills. And, of equally great importance, Kinder Morgan Canada has an outstanding record of operating excellence.
As a nation, we need to make progress on pipeline project approvals. Together, we need to find solutions to local concerns and work to ensure the benefits of new pipelines can be realized. Preventing pipelines from being built in Canada will not reduce global oil demand but it will prevent Canadians from receiving the benefits of supplying oil to fill that growing demand. And it will mean customers around the world won’t have access to Canadian oil that is produced with stringent safety and environmental laws – including those that address climate change – and a rigorous regulatory system.
And that is why we, a group of seven companies that directly employ more than 27,000 people in Canada, believe we can work together with everyone who has a voice in the pipeline discussion to foster that new conversation focused on finding solutions together to overcome the deadlock that’s holding up pipeline projects. We are ready to engage in this dialogue and to see projects such as the Trans Mountain Pipeline expansion built and we hope other Canadians are as well.
Submitted by Murray Edwards and Brian Ferguson on behalf of:
BP Canada, Canadian Natural, Cenovus, Devon, Statoil, Suncor, Total