Posted on February 18, 2016 by Commentator/Courier 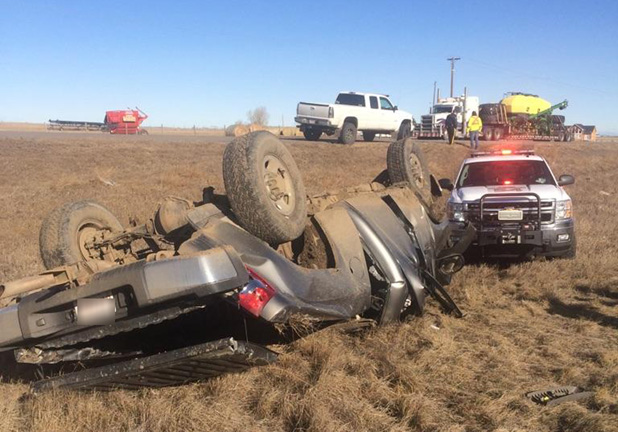 Submitted Photo A 26 year-old woman was transported to hospital with serious injuries on Feb. 16 after a single vehicle rollover.

A 26 year-old women from the Seven Persons area is lucky to be alive after sustaining serious injuries in a single vehicle rollover on Feb. 16. The accident occurred just off Highway 3 near Seven Persons when the young woman, who was driving in an adjacent field to the highway, sped up to crossover to the other side and hit the top of the ditch, which acted as a pivot point to flip her vehicle over. The woman was driving a GMC 2500 series pick-up truck. According to RCMP the actual cause of the accident is still under investigation; although speed was certainly a factor. No other vehicles were involved in the crash.

“She was conscious and able to speak on scene,” said S/Sgt Sean Maxwell of the RCMP. “There is some investigation left to do, but it does not look like drugs or alcohol involved.”