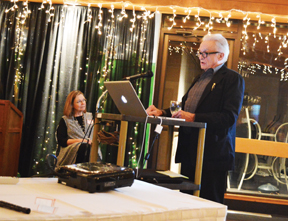 PHOTO BY TIM KALINOWSKI- Dr. Brian Reeves and Dr. Margaret Kennedy (seated) described their findings at two sites near the confluence of the South Saskatchewan and Red Deer rivers to members of the SE Archeological Society on Feb. 19.

By Tim Kalinowski
The South East Archeological Society held its AGM at the Medicine Hat Golf and Country Club last Friday evening. The highlight of the evening was the after dinner address by guest speakers Dr. Brian Reeves and Dr. Margaret Kennedy from the University of Calgary’s archeology department. The two have been undertaking major research on a significant group of First Nations ceremonial sites at the confluence of the Red Deer and South Saskatchewan Rivers just south and west of Cabri Lake straddling the border between Alberta and Saskatchewan.
The two most significant sites are called Bull’s Forehead and Minor, the value of the two is enormous because they are two of only a few major ceremonial sites in Alberta and Saskatchewan which are completely undisturbed by cultivation, urban development or oil and gas exploration. This has allowed researchers to gain a better understanding of how these major ceremonial sites would have been used and the rituals which likely took place there.
Reeves and Kennedy took turns speaking while the audience listened in rapt attention as they expounded on the ritual world of the Gros Ventre (Big Belly) culture, which likely constructed and maintained the sites for thousands of years.
At Bull’s Forehead the ritual activity was centred around a Medicine Wheel constructed on a high bluff overlooking the confluence of the two rivers. The wheel has been on private ranchland for most of the last century and therefore protected from disturbances. All around this central wheel the researchers have identified many smaller ritual rock circles and vision quest cairns all pointing directly toward, and in sight of, the Medicine Wheel. Unlike most ritual sites discovered, the Bull’s Forehead site also has causeways made of slag stones built like a short wall surround the Medicine Wheel’s hill and outlying ritual sites, demarking the whole territory within as a spiritual complex of sorts that would probably have been visited in the lunar cycle every 37 years, although researchers cannot conclusively say so at this point.
The Medicine Wheel was likely constructed originally to mark a significant event or spiritual vision in the life of the Gros Ventre.
The even more astounding findings are at the Minor site, which researchers are just beginning to explore. Last year a group led by Kennedy and Reeves, along with volunteers from both the Saskatchewan and Alberta Archeological Societies, mapped out 2,000 different ritual stone features surrounding two central Medicine Wheels. The stone features included ritual stone circles for Gros Ventre spiritual groups like the “Crazy Dog Society,” spiritual patterns and shapes constructed of stone, sweat lodge circles, vision quest cairns marked by either upright pink stones or rounded black/ blue stones which had been struck by lightning, objects of spiritual reverence to the plains First Nations peoples.
Dr. Reeves explained the significance of the many small cairns found at Minor and Bull’s Forehead.
“They are everything from burials to markers,” said Reeves. “Unfortunately with these rock-covered earth mounds the coyotes just love ‘em. I have seen several now where the coyotes just got in there and dug the hell out of it. So there was no artifacts, no human bones. Another thing some of these were used for were to make some kind of offering. The Gros Ventre ethnography talks about them being characterized by stuffing offerings under boulders. I think this is what we are seeing.”
The smaller sites may also have been used in Sundance scarification rituals for individuals on vision quests.
Reeves and Kennedy were both hesitant to say how significant the two sites were, specifically Minor which seems very significant indeed, however both were keen to get out there again this summer to keep constructing their hypothesis and overview of these incredibly sacred landscapes.
“Every site is valuable,” said Kennedy, “but I think because (we can see) the complex is what adds to the incredible significance of these areas. And with the integrity of the landscape. We can get a sense of the interlinkages of all these features.”