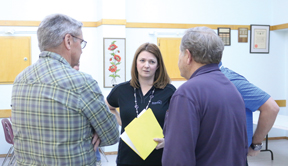 By Jamie Rieger
Representatives from Suncor Energy held an open house in Bow Island recently for people to learn more about  a proposed wind energy project being planned for the area.
“We are currently working with stakeholders and be a part of the community,” said Belinda Phillips, director of wind project development and operations for Suncor Energy.
Suncor has thus far secured 25,000 acres for the project, but would like more.
“For a 200 MW project, roughly 25,000 acres is needed. We would like 50-75,000 acres because it would allow for a larger project that could be built in two or three phases,” said Suncor representative, Joey Hood. “We are also currently doing desktop studies. We have a lot of cultivated acres, so we know we aren’t going to have certain environmental concerns.”
Their Sunbridge wind farm at Gull Lake, SK. was their first wind power project, going into production in 2002. They currently have six projects in operation, with a total wind capacity of 287 megawatts, enough to power approximately 100,000 homes per year.