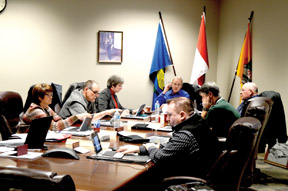 PHOTO BY TIM KALINOWSKI- Redcliff Town Council opted to reduce raw water consumption rates for one local user, but could not agree on other aspects of the billing.

By Tim Kalinowski
Redcliff council opted to reduce the community’s raw water consumption rate for one local resident at last Monday’s council meeting. Larry Granger is currently the only citizen within Redcliff town limits who has no access to treated water as there is no access to a treated line at his property’s location.
Mr. Granger sent in a letter asking for a reduction in his rates, (read out at the February 22 public meeting), as he was being charged the same as those in town who receive treated water despite not receiving the benefits. At that meeting council members asked staff to look into the situation and come back on March 14 with suggestions.
Staff had initially recommended that the capital component Mr. Granger currently pays be eliminated and to reduce his consumption rate from $2.50 per cubic metre used down to $0.97, the same as other residents currently pay for treated water. The reasoning was since Mr. Granger does not currently have access to water from the treatment plant he should not have to pay any of the capital component of his bill. However, Coun. Dwight Kilpatrick disagreed strongly with the suggestion.
“I would like to see some amendment to the (newly proposed) rates because I don’t believe all the capital (fees) should be struck because even that raw water is flowing through our intake and the lines coming up, which all wear out. Infrastructure is being used even for raw water. I don’t see how you can say there will be no capital component at all,” said Kilpatrick.
Coun. Jim Steinke openly wondered why Mr. Granger was being allowed to access raw water at all.
“I am of the opinion there should not be any raw water sold to any of the residents in the town of Redcliff,” said Steinke. “It should be all treated water and it (the bylaw) should say if you are a resident of Redcliff you have to buy treated water. You shouldn’t be able to buy raw water.”
“To sell him treated water he would have to pay for the infrastructure and the line going down there,” replied Coun. Larry Leipert. “That will be quite expensive for one person to do. I think that is the reason we have (these raw water rates). Now some day those guys are all going to get the treated water line running past there and they are going to have to pay for it.”
Staff informed council members that although there was a treated water line currently running past Mr. Granger’s property, there was just too much pressure in the line to allow him to hook on at that spot.
Mayor Ernie Reimer, Coun. Chere Brown and Coun. Cathy Crozier all expressed support for Coun. Kilpatrick’s idea of retaining a portion of the capital fee in Mr. Granger’s bill. They asked staff to come back next meeting with some baseline of what the costs are to use the water lines, pumps and raw water intake. The capital cost of using the water treatment plant will be taken out of the raw water equation Mr. Granger pays.
Raw water rates for the golf course were also up for discussion initially last Monday, but council members opted to remove that portion and bring it back at a later date as an independent agenda item.