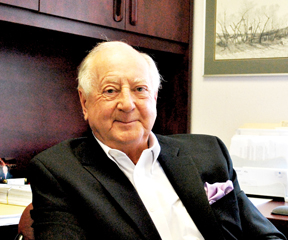 PHOTO BY TIM KALINOWSKI- Ivan Becker, president of the Desert Blume Community Association, said the organization does not want to become entangled in city vs. county politics over South Boundary Road issue.

By Tim Kalinowski
Ivan Becker, president of the Desert Blume Community Association, wishes Cypress County would not pick a fight with the City of Medicine Hat over proposed cost-sharing on South Boundary Road near his hamlet.
“The traffic, I would suggest, is two thirds the city and one third the residents of Desert Blume,” says Becker. “That road is in desperate need of some attention, and I think both Cypress County council and the City of Medicine Hat should give that some serious consideration. Hopefully the city and the county can sit down and work something that is favourable to everybody. And sooner rather than later.”
Desert Blume is a hamlet of Cypress County, but access to the community comes mainly off the city-owned South Boundary Road. Becker says Desert Blume, by its very nature, has a special niche in the county.
“In some instances I think maybe the county has to rid themselves of their rural community mindset,” explains Becker. “Desert Blume is more of an urban development within the rural community. There is substantial housing here and the taxes are considerable, and, therefore, considerable to the tax-base of the county. We are not asking, I don’t think, for something that somebody else wouldn’t also ask for.”
Becker points out Desert Blume’s benefits to Medicine Hat.
“The builders building at Desert Blume are from Medicine Hat, and this development is a huge contributing factor to the economy of Medicine Hat. Also our 18 hole championship golf course is also a credit to both the Desert Blume and Medicine Hat communities.”
Desert Blume has also taken on other financial burdens properly within the domain of the county in the past at their own cost, says Becker, and this deserves some consideration too.
“Range Road 61A was a gravel road when Desert Blume began development out here,” explains Becker. “That road was paved at the total expense and cost of Desert Blume Developments. The county nor the city participated in any cost-sharing to pave that road right up to the entrance going into the golf course. We are looking at possibly getting some sort of consideration and compensation from the county and the city considering that fact.”
Becker says Desert Blume does not want to become entangled in county versus city politics over this matter, and his community association will be taking steps to put pressure on local representatives to encourage them to reach a cost-sharing deal with the city.
“We’re certainly going to be politicking the council members of Cypress County. As a matter of fact I was just thinking about giving the reeve a phone call and expressing our opinion. We have sort of been sitting idly back waiting for this to possibly unfold on its own with (Coun.) Richard Oster representing us. But I met with him the other day and he didn’t feel there was any positive response from council. So he kind of left it up to us for our association to get together and campaign to get them to reconsider their thoughts.”
Becker says what this South Boundary dispute comes down to fundamentally is safety, not jurisdiction.
“As much as anything, it is a dangerous road,” asserts Becker. “There are lots of ripples on the road. It narrows in certain spots. And god forbid there should be a terrible accident on that road. It’s not a matter of when it is going to happen, it’s a matter of when.”