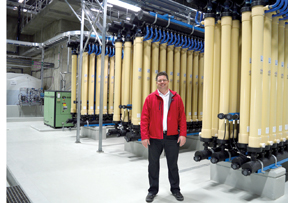 By Tim Kalinowski
The new $20-million Redcliff water treatment plant came online in February of this year. Last Friday the Courier was allowed exclusive access to tour the new facility and to show it off to the public for the very first time.  The treatment plant uses a state-of-the-art Pall Membrane and Clarifier system which ensures almost complete purity of the water flowing into town residential water lines.
It has been a five year process to get it to this point. It is three times the size of the old plant, and is designed to meet the needs of the town for next generation of growth and prosperity.
“I believe this is the biggest infrastructure project in the history of the town,” says Jamie Garland, Redcliff’s Public Services Director, who guided the tour. “I have been lucky to be part of the whole thing. I was one of the few that were here at the start, and it’s great to see where we are near the end. I have been pretty proud of it.”
Garland says it has been a challenge to get the project to this point and a steep learning curve for his operators.
“There were lots of little challenges within the project, and as you go through them, you have to overcome them,” he says. “You have to provide good, quality water to the town, which is ultimately what you have to do all the time. You are trying to learn the new, but you’ve got to still keep working with the old. So, at times, it was like two shifts of people: Some working on the old stuff, and others trying to work with the contractors and engineers to try and build this (new plant) properly.”
Garland says there is really no comparison between the old plant’s rapid gravity sand filter system and the new Pall Membrane microfibre filter system.
“Between the old and the new, it’s kind of apples and oranges,” he admits. “It’s that different. With this new plant the technology is more advanced; a lot of instrumentation, chemicals and different processes that had to be learned. We’ve had training as each section comes online. With the old system you always had to babysit it because there so many more things that could go wrong with the filters. This system, turbidity-wise, means bad water can’t go through these membranes. It’s pores are so small. It’s similar to a strainer that way, basically you cannot push stuff through there.”
The $20 million price tag for the project includes the consultation and design period with MPE Engineering, the reconstruction of the raw water pumphouse at the river to make it more powerful and more flood proof, the construction of the new raw water pipeline feeding into the town and the construction of the treatment plant itself.
It has been an enormous undertaking for all involved, but the results, Garland feels, have been worth it.
“This plant was designed for the next 25 years so it is calculated to match population growth in Redcliff,” explains Garland. “It is much more than we need at the moment, but Redcliff will have enough potable water to meet that growth.”
The testimonials from Redcliff residents who have now been exclusively drinking water from the new plant since February, when the old one was finally decommissioned and shut down, also speak for themselves.
“We’ve actually had a lot of people tell us how great the water is now,” says Garland. “A lot of people comment, ‘The new plant must be running because it tastes so good.’”
Arlos Crofts, Redcliff’s Municipal Manager, says there are two groups who deserve the community’s special thanks for ensuring this amazing and historic facility could be completed so successfully.
“Of the groups that need to be recognized for the success of this project, one is the town council, which had the political will to see the project through to the end,” says Crofts. “The other is Jamie and the operators for their commitment, especially with all the retraining they have had to go through and by their dedication to making sure there was a continuity in service as the new plant was being built.”
Redcliff will hold an official dedication ceremony for the new plant later this fall when all the final details of construction and testing are wrapped up. 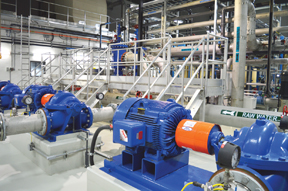 PHOTO BY TIM KALINOWSKI- The photo shows the flush pump system for the Pall Membrane System. The technology at play in the water treatment facility puts Redcliff at the forefront for municipal water treatment in the province. 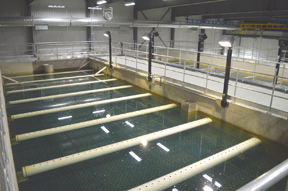 PHOTO BY TIM KALINOWSKI- The photo shows the ultra-modern clarifier pool that takes suspended solids out of the water before sending them to the Pall membranes.