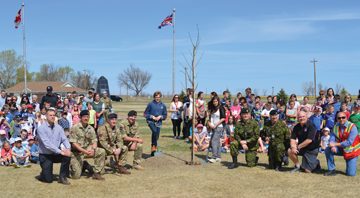 By Tim Kalinowski
Citizens of the Village of Ralston turned out in large numbers last Thursday to support “Operation WOMBLE,” a community clean-up and tree planting day. Carried out with military precision, the community was divided into quadrants with different Ralston School grades, supported by serving members and their spouses, each taking an area to canvass through pick up any litter they found.
Before dispersing for the general clean-up, community members also gathered to take part in a special tree-planting ceremony in honour of Earth Day near the Ralston cenotaph, British and Canadian flags flying proudly over the scene.
CFB Suffield base commander Lt. Col. John Scott said the planting of the trees was important symbolic gesture of the larger responsibility the base has in being good stewards of its land area.
“Part of the village clean-up is making sure that we have that environmental sustainability piece, even on the village side as opposed to just the training area. It’s one of this unique opportunities where you have British and Canadian villagers working hand in hand and side by side,” he said.
The name Operation WOMBLE was chosen because for many of the British residents of Ralston “The Wombles,” a kids show which encouraged the development of environmentally friendly habits, is an important touchstone of their childhoods. A press release from the base also said the name was chosen to symbolically represent the “partnership that exists between Canadian and British Forces at CFB Suffield.”
Lt. Col. Scott later elaborated more on this theme.
“Today is a great community spirit building day,” said Scott. “We have incorporated a barbecue and a few other things to get the village together. It’s sort of an 85 per cent British citizenship around here, with only 50 homes out of the roughly 300 that are Canadians. If you are a Canadian and you don’t have a few British friends here, you are pretty lonely.” 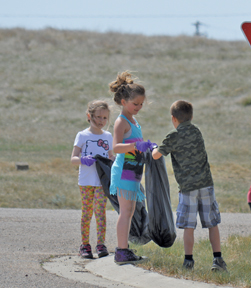 PHOTO BY TIM KALINOWSKI- Grade 2 students do their part to keep their village neat and tidy. 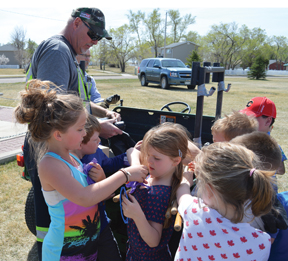 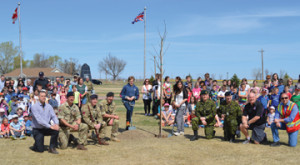