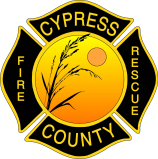 Pursuant to the provisions of the Municipal Government Act, the Forests and Prairie Protection Act, and Cypress County Bylaw 2008/14, Cypress County hereby orders, effective 1200 hrs, 04 May 2016 the following: