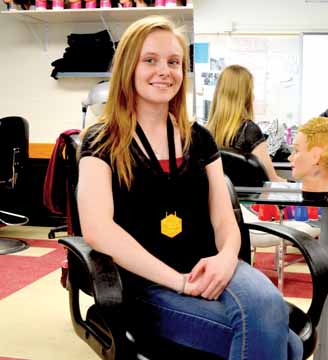 By Tim Kalinowski
Eagle Butte High cosmetology student Nancy (Aganetha) Klassen took home gold at the Southeast Alberta Regional Skills Competition at Medicine Hat College in the Junior Hairstyling category on April 24.
Eighteen year-old Klassen, who also attends RMAP in Redcliff in the evenings and works most mornings and afternoons at a local fabric store, spent months preparing for the competition with her teacher Ingrid Rose at Eagle Butte
“I couldn’t believe it at first when they said I won,” says Klassen. “It really gives me a confidence boost to go into hairstyling. I am confident in myself, but I feel I can achieve more now. I had a really good time, and I am so proud of myself for winning this medal.”
Klassen says she has been interested in becoming a hairstylist since she was a little girl, and that’s why she opted to take the daily cosmetology course at Eagle Butte High despite her busy work schedule and other school commitments.
“Ever since I was a little kid if someone was sitting in front of me with hair on their head, I had to play with it,” she says with a laugh.
Klassen admits she felt the time pressure of the competition. Students had an hour and a half to finish their hairstyle on a mannequin before judging began. Klassen chose a very complex hairstyle, a “zipper braid,” so it really came down to the wire to be able to finish on time.
“At first I felt the pressure, but after a few minutes you get so wrapped up in it that you just concentrated on your mannequin,” remembers Klassen. “And you really don’t notice anything else going on all around you. For the zipper braid you have a bunch of clips going at the same time. In all the videos were watching they had another person to hold the strands up front, so that was a lot easier. Doing it on my own using the clips was a lot more complicated, but I managed to do it. I am always up for a bit of a challenge.
“For the end pieces I didn’t know what I was going to do so I put a big bow on the side. So that was pretty cool. And for the parting, I zigzagged it.”
Klassen’s teacher Ms. Rose says she is proud of all the girls from Eagle Butte High who entered the competition and went all out, but credits Klassen for her efforts in the competition, and the months of practice she put in leading up to it.
“I am extremely ecstatic about Nancy’s achievement,” she says. “It’s a lot of work for these girls, and it’s a lot of dedication. With Nancy, we changed the style a couple different times. We knew we wanted to get that zipper braid. That we knew, but we weren’t sure how to do the whole style. It was a couple of months of practice.”
Klassen says the win has solidified her ambitions for the future.
“I really want to do this for my career. That’s the plan: I want to be a hairstylist.”