Council gets an earful from Dunmore residents over proposed subdivision 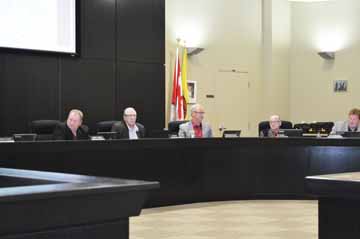 PHOTO BY TIM KALINOWSKI- Cypress County councilors listen to concerns from Dunmore residents during the public hearing for a proposed new subdivision.

By Tim Kalinowski
Cypress County council received an earful from several Dunmore residents at the public hearing for a proposed new subdivision in the community last Tuesday. The letters and in person complaints came about as a result of a schematic plan introduced for the new development (proposed by landowner Wilde Possibilities) in an area just north of current subdivision, east of Eagle Butte Road and just south of where the old Eagle Butte driving range used to be. Council had to vote on changing the current land space designation from Agricultural IDP District 1 to Hamlet Residential to allow the development to go forward, which was the reason for the public hearing last week.
The area is a big empty field right now, but the new subdivision will soon have it filled with houses. The schematic plan introduced to council showed the new subdivision abutting directly up against the current houses with no roadway or designated green space in between.
Several residents along the current fenceline registered their concerns that the existing green space provided a safe alternative walkway to allow local children access to a nearby playground, allowed emergency vehicles better access to homes in the area and acted as a de facto park for walking pets and other outdoor activities, all of which would be lost if the development was allowed to go ahead as shown.
Objectors said they wished part of the existing space to be preserved as a green space between the new and older subdivisions, or at least that a public walkway be maintained between the two developments so they were not abutting against one another directly.
Jeffrey Dowling, planning supervisor for Cypress County, still recommended that the plan be approved despite these objections, saying it conformed to every policy Cypress County has on subdivision approval. He reminded those who complained Wilde Possibilities was the rightful owner of the land, and all other uses local residents had been putting to it could be considered trespassing. However, he said he had recently spoken with the developers and they assured him the schematic as presented was not the final plan, just a mock-up constructed by Global Raymac Surveys on behalf of Wilde Possibilities to show the area where the subdivision would be built, and how it might look afterward. That the full plan would include a walkway between the subdivisions.
Coun. Garry Lentz wanted further reassurance on this point before council voted.
“If the developer agreed to putting in a path there two months ago, why isn’t it on this plan? And what assurance do we have that it will ever be put on if we approve this as is?” he asked.
“We don’t have the exact detail of what the internal subdivision is going to look like,” admitted Dowling. “But certainly as part of the subdivision application process that detailed design would have to be included as part the diagram submission that would accompany the (final) application.”
“Everybody is in agreement that (pathway) will be looked after in the subdivision stage to address the neighbours’ concerns,” concurred Brian Munro of Global Raymac Surveys.
“Another way to reassure,” said Reeve Darcy Geigle, speaking directly to the complainants on hand in the public gallery, “is there are three of us councillors on the MPC (Municipal Planning Commission).”
After the public meeting, council held a brief discussion in which councillors were again assured the land use change was all they were voting on, not the final plan from Wilde Possibilities on what the new development would look like. The final vote was 8-1 in favour of the land use designation change.
Coun. Dan Hamilton, who represents the hamlet of Dunmore, said he was certain the neighbours’ concerns would be addressed at the Municipal Planning Commission talks to come with Wilde Possibilities.
“The development was approved,” he confirmed, “but it has been noted that the green space needs to be taken care of. Our strategic planning for Dunmore does have a plan for more walkways to be created in the hamlet. So I am pretty sure that Peter Wilde (Wilde Possibilities), and his associates, and Jeffrey Dowling will be able to put their heads together to accommodate what the people there are looking for.”