The Grasslands Project premieres in Foremost 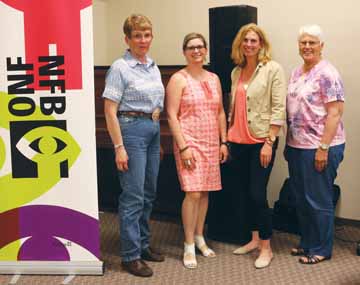 PHOTO BY JAMIE RIEGER- Pictured, from left: Bonnie Peterson, Larei King, Lee Harty, and Joan Hughson contributed to a short film about women who farm and ranch, which was one short film in a series of 10 entitled, The Grasslands Project.

By Jamie Rieger
Foremost residents had the opportunity on Sunday afternoon to view the premiere of The Grasslands Project, a group of short documentary films that give an up-close look at life on the prairies.
After gathering initial feedback from people in small, rural communities throughout southern Alberta and Saskatchewan 14 months ago, filmmaker Scott Parker and producer, David Christensen, both from the National Film Board, embarked on producing a series of films that captured the farming and ranching way of life.
One of those films, involved four women from the County of Forty Mile who embrace the farming and ranching lifestyle and told their stories in the short film, “Life Out Here”. Joan Hughson, Larei King, Bonnie Peterson, and  Lee Harty all contributed to the documentary about women who live the farming and ranching life.
“When I met Joan, she made such an impression on me,” said Parker. “I called her about doing a film about women in farming, then came to Foremost and talked to her about other women who could be involved with the project.”
Over the next several months, they met a few times to develop themes and do work on the project and the final product was what the community got to see at the premiere at the Foremost Community Hall on Sunday afternoon.
Other short films in the series include one of a rancher in SW Saskatchewan and the Greater Sage Grouse, an artist, a feature on Wood Mountain, the Eastend volunteer fire department, the Val Marie Hotel, and others.
The Grasslands Project will be released in English and French to the public on June 1 at nfb.ca/grasslands.